A History of American Weather Observation

In a previous article, I detailed new advancements in radar technology, namely Dual Polarization Radar, and how weather radar in general has improved over the course of the 20th and 21st Centuries. However, for 80+ years before the proliferation of weather radar, and even satellite technology, American meteorologists working at what would become the National Weather Service had to rely on simple ground observations and sporadic kite and balloon upper air observations to know the current state of the atmosphere. The evolution of weather observations in America is a story that goes back even before 1776 and one that is closely entwined with advancements in communications.

The first systematic weather observations, taken in what would become the state of Delaware, took place from 1644-45 at the Swedes' Fort, near the present site of Wilmington, Delaware. At that time, observations relied largely on what could be sensed by a person on the ground as any weather observing equipment was still in its infancy over in Europe. For example, one of the first thermometers with a scale was designed by Robert Fludd in 1638, and the first barometer is credited to Evangelista Torricelli in 1643. Moreover, before the 18th Century, the scales for temperature that are used in weather reports today, Fahrenheit and Celsius, hadn't even been devised yet. 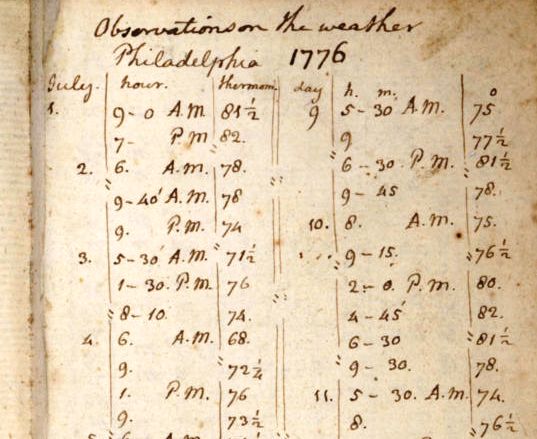 In the 1700s, some of the Founding Fathers of the United States were also instrumental in the advancement of weather observing in the Colonies, and eventually, the United States. Even before his famous kite experiment in 1752, Benjamin Franklin documented storm movement and weather patterns. Most notably, he documented the movement of a hurricane from Philadelphia to Boston in 1743. Thomas Jefferson was also an early champion of American meteorology. Not only did Jefferson keep a personal record of systematic weather observation at his Monticello estate for over 50 years, he also proposed a plan to provide a thermometer to every county in Virginia in the 1770s. Jefferson's foundational plan for a national weather observing network was soon hampered, though, by the Revolutionary War. It would be another war, the War of 1812, which would lead to the spread of weather observing sites further into the heart of the Northwest Frontier. Following the War of 1812, the American Government took control of more territory to the west of the original eastern states. To do this, they set up Indian agencies and supporting forts from Lake Michigan west to the Missouri River. One of the earliest such forts, and also an outpost of frontier weather observations for several decades, was Fort Snelling near present day Saint Paul, MN. The first systematic weather observations to take place at Fort Snelling were in 1819. Observations would continue at the fort from the 1820's until the 1890's (with a gap in observations during the 1850's and 60's when the fort was deactivated). Weather observations at this time consisted of thrice daily temperature readings, once daily wind direction and weather condition note. In fact, it was at Fort Snelling that the first tornado was observed in Minnesota, on April 19, 1820.

It wasn't until the proliferation of a national telegraph network, that weather observations could be collected at a central location without having to wait for months or even years to collect the data. In 1848, Secretary of the new Smithsonian Institution, Joseph Henry, inaugurated a telegraphic network of weather observers "to solve the problems of American storms." Finally in 1870, the organization now known as the National Weather Service (then under control of the Department of War) brought more timely regimentation and oversight to the national observer network. This network grew quite rapidly, despite the rudimentary communication technologies at the time, from 24 synchronous observing stations in 1870 to 2,000 by 1891.

One more advancement in communications technology would finally enable weather instruments to regularly take to the air: radio. Weather balloons and kites had been used as early as 1885 to take measurements of temperature, relative humidity, and winds above ground level. Additionally, in the early days of aviation in the 1920s and 30s, pilots flew sometimes risky high-altitude flights in unpressurized aircraft to take weather measurements. It wasn't until the radiosonde came into regular use in 1938 that a safe and relatively reliable method for sending weather instruments through the troposphere and beyond became possible. A radiosonde is a package of weather instruments coupled with a radio transmitter which enables the reception of weather data back on the ground. This entire package is then lifted by the ubiquitous weather balloon.

The history of weather observations in the United States is older than the country itself. From the early, rudimentary instruments employed by isolated clergymen in the 17th Century, to Jefferson's ambitious vision of a national observing network, to the realization of that vision (first by telegraph and today by the Internet), the path to today's modern weather observing network has always been closely intertwined with communications advances. Today, that system continues to advance at a rate perhaps never before seen. With the proliferation of such Internet platforms as Facebook and Twitter, ordinary citizens can now augment and participate in the collective task of weather observation like never before. Time and technology will only tell what the future holds for weather observing in America.