What is a Seiche?

The term seiche is likely one that many folks may be unfamiliar with. Even coming up with the correct pronunciation of the word can be a difficult test, as it was for me. Webster's dictionary defines seiche (pronounced as saysh) as: "an oscillation of the surface of a landlocked body of water (as a lake) that varies in period from a few minutes to several hours." This is a start, but to gain a full understanding of what a seiche is, lets dig into how, where, and when seiches develop.

The Science behind the Seiche...

To gain an understanding of what a seiche is, it is helpful to look at how water behaves when in a bathtub. First, let's assume the bathtub is half full of water. Now, imagine pushing as much water as possible to one end of the bathtub. Once a substantial amount of water has been pushed to one end of the bathtub, think of what would happen if you were able to abruptly let the water rush back down. This would create a sloshing effect of the water in the bathtub, as the water would first collect (and raise the water level) on the opposite side of the bathtub, while simultaneously lowering the water level on the side that initially held the excess of water. As long as no other forces were applied to the water, the water would sway from one end to the other several times (thereby continuing to raise and lower the water level on the opposing sides), until it would eventually come to rest. This is essentially what a seiche is on a very small scale. A seiche is basically a standing wave, due to the pendulum-like movements of the water levels that occur during a seiche.

Now, let's think about how this can occur on a larger scale, such as on one of the Great Lakes. The two main factors needed to create a seiche are air pressure changes and wind. The most important factor is wind, but favorable air pressure changes from one end of the lake to the other can enhance a seiche. There are two weather situations that can act to create a seiche. One occurs during the summertime, and is called a derecho. The other situation that can lead to a seiche is when a prolonged period (a few days to several days) of high wind occurs over the basin in a consistent direction. Both scenarios result in the pushing of water from one end of the lake to the other. When the water is pushed by strong winds of a persistent direction, water accumulates on the downwind side of the lake. As a result, the water level on the windward side lowers, while the water level on the leeward side rises. The image below gives a good conceptual model of how it works.

After the winds have acted to pile the water up on one side of the lake, a sudden drop in wind speed is necessary to produce a substantial seiche. This goes back to the bathtub analogy of being able to let the water rush back down as quickly as possible, thereby enhancing the intensity of the sloshing back and forth in the tub. Pressure changes along the lake can work with the wind to produce a larger seiche as well. This aspect is most common during derecho events. Derechos are lines of thunderstorms that are accompanied by severe straight-line winds, which can top 100 mph at times. Derechos move quickly and produce wide swaths of damage. When these systems approach a Great Lake, the pressure rises at the same time the high winds arrive on the windward side of the lake. As the derecho heads across the lake, the high winds and sudden change in air pressure acts to displace a significant amount of water downwind across the lake. Then, just as quickly as the straight-line winds descended on the lake, they will abate, thereby creating a seiche.

The tricky thing about seiches is that they not only cause damage due to high water levels, but also due to low water levels. Rapid changes in water levels can produce damage to anchored boats. In some cases, seiches can even landlock boats near the shore as the water level quickly retreats. Other times, the sudden rise in water levels can surprise swimmers or beach goers, and in extreme cases drownings have occurred due to seiches. Each seiche varies, but water level changes can measure several feet, to greater than 10 feet during major events.

What Areas Can Experience Seiches?

As Webster's indicated, a seiche can form on landlocked bodies of water. Any lake can experience a seiche, but protected bays of the ocean can also see them as well. In general, the greater the size of the lake, the more significant a seiche can be. Lakes or ocean bays that have an elongated shape can see the most significant seiche events. Lake Erie, for example, is an ideal lake for the formation of seiches. Its southwest to northeast orientation, along with its fairly shallow basin (considering the lake's size) make it a prime target for major seiche events. Consequently, Lake Erie has seen some of the most significant seiches of any of the Great Lakes. Although, significant seiches can occur on any of the Great Lakes. 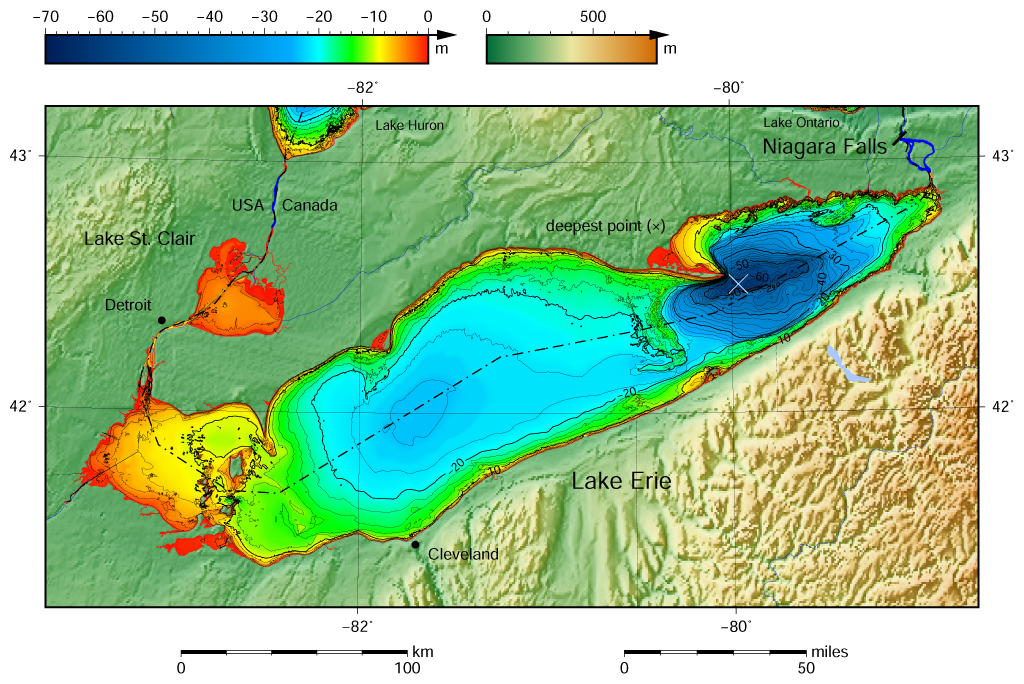 Due to Lake Erie's southwest to northeast orientation, a persistent and strong wind out of the southwest is ideal for setting up a seiche event. The other aspect that makes Lake Erie more prone to damage from seiches is the rather high population it has on both the southwest and northeast side of the lake. Toledo, OH is located on the southwest shore, while Buffalo, NY is located along the northeast shore. On November 14th of 2003, a seiche that displaced water levels 6 to 7 feet from one end of the lake to the other occurred. In the graph below, time is on the horizontal axis, while water level in feet is on the vertical axis. The water level changes are then plotted for the towns of Buffalo (the rust colored line) and Toledo (the blue colored line). Notice how the seiche is caught perfectly near 12:00 GMT (just left of center). At that time, the water level has risen 6 feet in a matter of minutes in Buffalo, while it has fallen nearly 7 feet near Toledo.

One of the deadliest seiches in history occurred back on July 4th of 1929, in the town of Grand Haven, MI. Thousands were gathered at a park on the eastern shore of Lake Michigan just as a derecho hit the area with high winds and a 20 foot wave accompanied by a rise in the lake level along the shoreline. This came so quickly, that many folks weren't able to get to higher ground before getting swept up by the rapid rise. 10 lives were lost on that fateful 4th of July. Thankfully, many seiches are so insignificant that they go nearly unnoticed. But even a lake level change of a few feet can create some concern.

The images below illustrate how quickly lake levels can rise due to a seiche. Back in late November of 2001, a major low produced high winds over Lake Superior that induced a seiche. The first image shows a man walking along the pier in Canal Park in Duluth, MN. The second photograph shows what happened minutes later, as the pier flooded due to a sudden seiche.

Seiches can be thought of as the Great Lakes version of a storm surge. Storm surge is a term that is often used in conjunction with landfalling hurricanes. There is one main aspect of a seiche that differentiates it from a typical storm surge. This is the fact that the water level rise found in a seiche oscillates from one end of the lake to the other, in periods of 15 minutes to several hours, until the body of water comes to rest. The other main difference is that a storm surge always indicates a rise in water level, while a seiche can be noted by either a rapid rise or fall in water level. Thankfully, hurricanes will never cross the Great Lakes, but seiches will commonly impact the Great Lakes. Now that you know what they are and how they form, you can more easily prepare for their impacts. The National Weather Service (NWS) does issue seiche warnings when a major event is predicted, but be aware, seiches can occur with little warning.