Tornadoes are one of the most devastating and destructive forces, meteorologically speaking.  Causing significant damage every year and threatening the lives of those in the path, tornadoes are also widely and rightfully feared by millions.  So what is a tornado?  A tornado is defined as "a violently rotating column of air, usually pendant to a cumulonimbus, with circulation reaching the ground" according to NOAA's glossary, but that doesn't really seem to do it justice.  Let's dive into the science behind tornadoes to better understand this dangerous phenomenon.

HOW A TORNADO FORMS

A tornado, as we just defined, is a violently rotating column of air that reaches the ground.  But how does this column of air begin rotating in the first place?  First you need a thunderstorm with a strong updraft (column of rising air).  These can be created via frontal boundaries or by heating the surface tremendously, allowing for air to rise on its own due to buoyancy.  So now that we have a column of rising air pumping a bunch of moisture into this thunderstorm, we need to find a way to get it to start rotating.  Rotating updrafts are usually a product of their environment.

Wind shear, defined as a change in wind speeds and/or direction over a relatively small distance, needs to be set up in one of two ways.  One is that the direction changes with height.  This will "spin" the updraft and cause it to rotate weakly.  Another way to do this is to have relatively fast moving winds just above the surface, known as a low-level jet stream.  The strong winds aloft will cause air to begin rolling over itself causing small pockets of turbulent air.  A frontal boundary then can come along and lift this rolling air and create a rotating updraft.  Now that we have a rotating updraft, we need to find a way to speed up the rotation.  The most common method is the rear-flank downdraft.

Similar to an updraft, the downdraft is a column of descending air.  Many times, the winds higher up in the atmosphere simply push the air "upstream" as it rises and then you'll get precipitation and possibly strong wind gusts falling out ahead of the storm, known as the forward-flank downdraft.  However, a downdraft can sometimes occur behind the storm relative to the direction it is traveling.  We call this a "rear-flank downdraft" which is a key ingredient to tornadogenesis.

Supercellular storms are defined as a "thunderstorm consisting of one quasi-steady to rotating updraft which may exist for several hours" according to the NOAA glossary.  This storm produces the strongest tornadoes and also produces the textbook example of a tornadic storm.  They are single cellular meaning they are not part of a larger system like a squall line.  The rotation means that the path of the supercell is not always predictable as they are known to shift direction at a moment's notice, especially when the storm becomes tornadic. 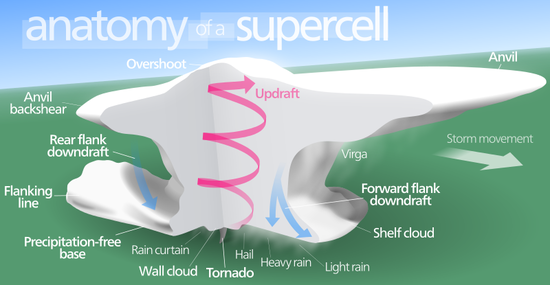 A mesoscale convective system (MCS) is defined as "a complex of thunderstorms which becomes organized on a scale larger than the individual thunderstorms, and normally persists for several hours or more" by the NOAA glossary.  This includes storm systems like tropical cyclones and squall lines among others.  These systems are known to create relatively weaker tornadoes as the storm system has difficulty creating strong rotation the same way a supercell can due to interference from other portions of the MCS.  However, pockets of rotation can develop with an "inflow notch" which is where air flows into the storm similarly to a supercell's updraft.  As air comes rushing into the storm, it is often right next to strong outflow from the storm system.  At the inflow-outflow boundary, rotation can develop and strengthen similar to the process we outlined above with the rear-flank downdraft.  These tornadoes generally don't last as long as a supercellular tornado as the location of inflowing air doesn't remain in one place for long unlike the supercell. Tornadoes come in many different shapes, sizes, and strengths.  The primary defining feature of a tornado is wind speed.  The EF-Scale (Enhanced Fujita Scale) analyses damage from a tornado in order to estimate the wind speeds.  It ranges from 1 to 5 with 5 being the strongest.  Along with the official wind speed classification, a number of terms have arisen to describe the shape and size of a tornado.  Terms ranging from rope to stove pipe and wedge have been used to describe the varying shapes of tornadoes, though it is important to note these are not scientific terms.  Another type of tornado is a "multiple vortex tornado" which means there are several smaller rotating columns of air rotating around one large rotating column of air.  These are devastating tornadoes as only the strongest create the multiple vortex phenomena, but unfortunately, the science behind the development of these monsters is not fully understood.

Dual polarization radars allow us to detect developing and existing tornadoes in several ways.  The best way to identify a threat for a developing tornado is via storm relative velocities which displays the motion of air relative to the movement of the storm system.  This allows meteorologists to more accurately identify pockets of strongly rotating air and is the primary tool for identifying tornado threats.  This tool has been around since the advent of Doppler radar and continues to be valuable.

There are other radar products that can show features of a tornadic storm, but are generally not used to initially determine a tornadic threat.  The most famous is the "hook echo" which appears on reflectivity images (the radar image that shows precipitation).  The hook echo shows up when the rear-flank downdraft develops in a region where precipitation isn't occurring and therefore is easily identified.  The tornado generally forms on the inside of the hook, though a hook echo does not always guarantee tornado development.

Another couple of useful tools are called the correlation coefficient and differential reflectivity.  These are a little more complicated, but essentially, they display the shape of precipitation to identify rain vs snow vs sleet vs hail, etc.  This tool is particularly useful when determining if debris has been picked up by the tornado.  Correlation coefficient values below .80 are oddly shaped objects (debris) and usually show up in varying shades of blue on the image.  Differential reflectivity values below zero will display the same thing, however values near zero may show up as the debris will tumble as it blows around which can sometimes trick the radar into believing that the object is a sphere.  The color displayed is usually a shade of gray.  The two tools can be used together to accurately identify debris in a tornado. Many people are familiar with the nickname "Tornado Alley" in reference to the central and southern Plains where some of the strongest thunderstorms and tornadoes frequently occur.  This region is particularly prone to these strong storms due to a variety of reasons.  Perhaps the most important feature is that this region sits at a crossroads for differing air masses.  You get warm, moist air from the Gulf of Mexico, cool, dry air from the Northwest, warm, dry air from the Southwest, and often times, the jet stream sits right on top of the Plains.  This clashing of air masses results in thunderstorm development on a large scale which is responsible for a number of tornadoes.  However, while this region is at a crossroads, it also largely flat and lacking much vegetation outside of farmland.  This results in a more favorable wind shear environment (changes in wind over a short distance) thanks to the lack of obstacles.  This also means that surface heating is much stronger than heavily forested areas.  Finally strong temperature inversions are common in this region which allow potential energy of storms to increase through the day before finally allowing storm development in the afternoon / evening.  This combination makes this part of the US one of only a few places in the world where tornadoes frequently form and the main tornado season for Tornado Alley is from late spring through early fall.

The lesser known neighbor of Tornado Alley is often referred to "Dixie Alley" and is located mostly in the southeastern portions of the US, especially along the Gulf Coast.  This region experiences a spike in tornadoes during the late winter and early spring due to the shift of the jet stream during this time of the year.  Colder air gets dragged further south than normal and this cold, dry air collides with warm, moist air from the Gulf of Mexico to create violent thunderstorms in the region.  There are other pockets of increased tornado development in the US and across the world, but Dixie Alley and Tornado Alley remain the two most heavily impacted regions.

So now to the most important part of this overview.  What do you do when you're threatened by a tornado?  There are a series of steps you can take in order to increase your odds of survival during a tornado.  First and foremost, find substantial shelter such as a sturdy building or a tornado shelter.  Get to the lowest level of this building, underground if possible, and into the most interior portion of this level; a bathroom or closet works.  The idea is to put as many walls between you and the flying debris outside as possible.  If you are outside or in a mobile home and don't have access to substantial shelter, your best bet and last resort if you physically see a tornado will be to find a ditch or low lying area, lay as flat as you can face down and cover the back of your head.  The idea is to allow debris to fly over you.  It's important to note that an overpass is one of the worst places to seek shelter during a tornado.  For additional details on preparing for and surviving a tornado, visit Ready.gov's tornado page for some excellent tips.

Keep updated on your local forecast, the severe weather threat for your region, and the latest warnings / watches for your location via Weatherology's numerous resources.