The Accuracy of Oz

“The Wizard of Oz,” a 1939 movie starring Judy Garland which has, after over 75 years, become a cinematic classic. One of the most memorable scenes from the film, and one which has undoubtedly inspired numerous young meteorologists, including myself, is the scene of the twister encroaching on the Gale family farm. After 75+ years, does this special effect “stand the test of time,” according to modern meteorology?

Visually, the tornado or "twister," as it's referred to in the movie, is not far from the reality of how many tornadoes look in the real world. A tornado, like the one in the film, could be described as a large rope, versus a wider stovepipe or wedge tornado, which is much wider in proportion to its height than this example. Moreover, there have been several documented cases where actual tornadoes that storm chasers have encountered in the field very closely resemble the Oz tornado. One of the more widely published examples of this is the tornado which did damage near Cordell, OK in May of 1981. The Oz tornado is also realistic in its depiction of a debris cloud at the base of the funnel where the vortex picks up dirt and debris and ejects it, sometimes great distances, away from the funnel. Although the audience is never really afforded a wide shot of the "storm" producing the tornado in the film, there are several shots which show the cloud base of the thunderstorm in motion. This would be another accurate point about this special effect in that it hints that there is also some corresponding motion or rotation in the parent thunderstorm consistent with a rotating mesocyclone within a supercell thunderstorm. 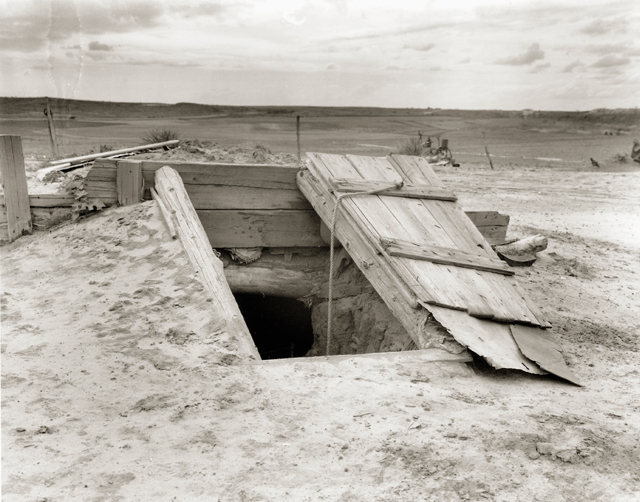 Furthermore, most of the characters on the Gale farm (except Dorothy, of course, who gets carried away by the tornado) do follow proper tornado safety practices. Before the tornado arrives, all of the farmhands, as well as Aunt Em and Uncle Henry, seek shelter in an underground storm cellar. In some of the strongest tornadoes that have occurred, like the EF5 tornado which hit the city of Moore, OK this past May, an underground storm shelter is often the only place where a person can survive a direct hit. EF5 tornadoes are characterized by an ability to completely sweep well-built homes off of their foundations and leave nothing but disintegrated remnants some distance downwind. Thus, in these violent cases, an interior room on the lowest floor would not provide adequate protection. 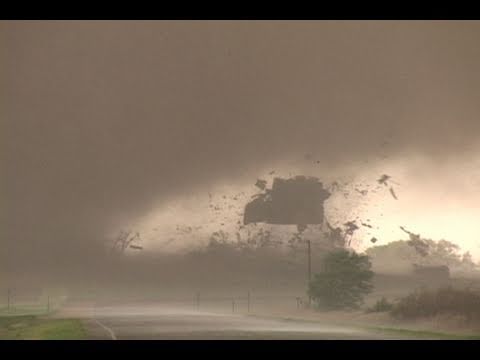 The picture above is not a still frame from The Wizard of Oz, but is in fact taken from footage shot by chaser Scott McPartland of the tornado which touched down near Attica, KS on May 12, 2004. In part of that footage, a tornado appears to completely lift a house off the ground before the view is shrouded by dirt and debris. Upon inspection after the storm, though, this particular tornado only removed the top floor and roof of the home and not the entire house. Moreover, this tornado was only rated as an F2 on the old Fujita scale. While the strongest tornadoes definitely are powerful enough to lift an entire house off of its foundation, in reality, the change in wind direction and speed (wind shear) over short distances in a tornado would most likely cause a home to disintegrate instead of allowing the house to remain intact for minutes in the funnel as in the Oz film.

Finally, one more area where the film deviates from reality is in the motion and track of the tornado. In the movie, the tornado is seen several times crossing the background from left to right and back again. In real-world cases, the vast majority of tornadoes travel nearly straight paths during their lifetime. As seen in the track map from the historic April 2011 tornado outbreak across the southern United States, almost all of the tornadoes had nearly straight trajectories. This is due to the fact that damaging tornadoes almost always form from the mesocyclone of a rotating supercell thunderstorm. These supercell storms tend to follow the mean wind in the lower-to-middle levels of the atmosphere. There are some exceptions, such as the tragic case of the El Reno tornado of May 31, 2013. This tornado took the lives of 8 people, including storm chaser Tim Samaras, when the tornado took an unexpected left turn. This was very unusual as tornadoes rarely deviate from straight or slightly curved paths. Thus, the zig-zag motion of the Oz tornado is the second unrealistic aspect about the special effect.

All in all, the tornado in the 1939 film "The Wizard of Oz" is a special effect not too far away from reality, especially with respect to its appearance. While the funnel may produce some less than realistic damage and exhibit a largely unrealistic zig-zag path, for a movie over 75 years old, the effect still holds up well, even with modern movie-going audiences accustomed to computer animated effects. The Oz tornado is even more impressive considering no motion picture footage of an actual tornado had been filmed in the United States before 1939.