The Pitfalls of Snow Forecasting

Each year, meteorologists around the country either dread or look forward to the challenges that winter forecasting brings. Either way, it's a good idea for meteorologists to keep the aspirin handy, while trying to peg the outcome of each winter storm. The end result of this struggle is a prediction of how much snow will accumulate during the snow event. Oftentimes, meteorologists will not even agree with each other on how much snow will fall, and the public will hear several different scenarios as to how a particular event will pan out. Certain snow events can have huge discrepancies, as one meteorologist may say a foot is expected, while another says an inch or two. In order to understand how this can happen, let's dig into the methodology a responsible meteorologist follows when forecasting snow.

Three main ingredients are needed in order to see an accumulating snowfall at any given location. These vital ingredients are: ample moisture, atmospheric lift (anything that creates rising air), and plenty of cold air. Moisture is something that can be very limited at times during the winter season. This is due to the frequent surges of extremely dry arctic air masses that arrive from Canada. When snowstorms ensue, the northern edge of each system will oftentimes see a sharp cuttoff in snowfall amounts, due to the presence of these bone-dry arctic air masses. This creates very tight gradients in snowfall, as amounts can vary several inches in a distance of just a mile or two. Atmospheric lift is another ingredient that must be present in order to see snow. When lift occurs in the atmosphere, air is rising, which will oftentimes result in cloudiness. When the lift is strong enough, precipitation will form in the clouds, either reaching the ground as rain or snow. Upper level troughs, strong upper level jet stream segments, and warm/cold fronts are just a few mechanisms that create lift in the atmosphere. Atmospheric lift is a quantity that meteorologists can decipher by digging into forecast models, which try to emulate the state of the atmosphere at a future time. It is only through an in-depth analysis of the forecast models that meteorologists can pinpoint where the vital ingredients for snow are expected to coincide with one another.

Meteorologists are constantly studying the output from forecast models. Each forecast model ingests current measurements of wind, humidity, temperature, and pressure throughout the atmosphere. After this data is ingested, the forecast models start to fast forward hour by hour, trying to emulate what is going to happen 12 hours, or even 10 days from now. As you would expect, this is a mammoth task, and as a result the accuracy will suffer at times. Unfortunately, when the atmosphere is in a more chaotic state, as is the case during a winter storm, the accuracy can suffer even more. This will result in huge discrepancies from one forecast model to the other. One model may say the storm will stay south of a certain location, while another may indicate it will strike head on with heavy snow. It is only through comparing the differing model solutions, that a meteorologist can make his/her own conclusion on how an event will play out.

The main factor that affects the snow-liquid ratio is temperature. When temperatures are well below freezing from the surface up through the cloud heights, a drier, more airy snow will fall. This type of snow can be referred to as 'fluff,' as lots of air pockets will form as it accumulates. This results in a very high snow-liquid ratio (20-1 or greater). Conversely, when temperatures are near freezing from the surface up to the cloud height, a wet and slushy snow will ensue, resulting in a very low snow-liquid ratio (10-1 or less). This plot depicts the average snow-liquid ratio that occurs over the lower 48. As you would expect, the snow ratios are typically higher where winters are colder, due to the drier character of the snow. Meanwhile, areas that are further south will generally experience much lower ratios, as any snow that falls there will tend to be very wet and slushy. 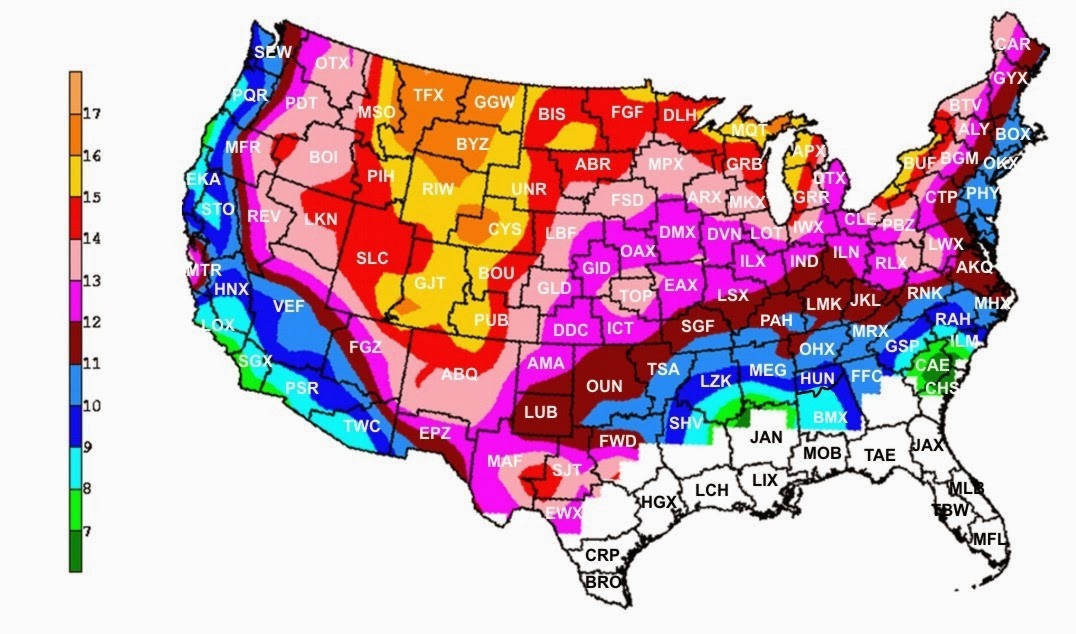 After all that, you are probably saying, "why that sounds like a lot of fun." The art (and it really can be called an art) of predicting snow can truly be a difficult endeaver. Even when the forecast models are in agreement for an incoming storm, many other decisions are left to be made by the meteorologist. It is only after all aspects of the system have been considered, that a prediction of snowfall can be made. It is a challenge only a passionate and driven meteorologist can meet head on. Experience is also important. A more seasoned meteorologist will be able to reference the outcomes of past winter storm events, as they make the call on a current system. Just remember to keep the shovels and snowblowers handy this winter as we work on giving you the best idea of what to expect during each event.