Professor Paul Thursday - Saharan Dust Storms | weatherology°
This website uses cookies to improve your user experience and for analytical purposes. By clicking the "Accept & Close" button, you agree to the storing of cookies on your device while using this site. Please see our privacy policy to learn more about how and why we use cookies.

When it comes to the hot deserts of the world, it doesn’t get any bigger than the Sahara. The name Sahara is actually derived from the Arabic word ṣaḥrāʾ, which translates to desert. The Sahara desert covers an area of northern Africa that amounts to around 3.5 million square miles. This makes the Sahara larger than the continental US, which is approximately 3.1 million square miles in size.

Along with its vastness, the Sahara desert is also known to be a rather windy place. This part of the world experiences the easterly trade winds, which push the sands around each year. Some of it collects into the impressive sand dunes that can reach heights of around 500 feet, while another portion of it lifts up into the lower atmosphere. Eventually, it collects anywhere from 5,000 to as high as 20,000 feet in the atmosphere as it pushes westward over the Atlantic Ocean.

Some of the largest dust plumes are created when lines of thunderstorms, accompanied by strong straight-line winds, traverse the region. The strong outflow winds from these systems can create massive dust storms known as haboobs.

Surprisingly, the Saharan dust contains life-sustaining nutrients, such as iron and phosphorus. A portion of the dust lands in the Atlantic Ocean, which is a boon to marine-life. The folks at NASA, via satellite data, have also estimated that around 22,000 tons of Saharan dust settles in the Amazon Rainforest each year, acting as a natural fertilizer. In total, around 60 million tons of dust is transported out of the Sahara each year. 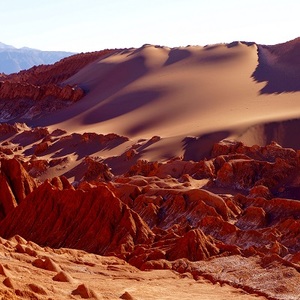 Around 60 million tons of dust blows off the Sahara each year.
Next
A New Eye in the Sky