Professor Paul Thursday - What Is A Heat Burst? | weatherology°
This website uses cookies to improve your user experience and for analytical purposes. By clicking the "Accept & Close" button, you agree to the storing of cookies on your device while using this site. Please see our privacy policy to learn more about how and why we use cookies.

Professor Paul Thursday - What Is A Heat Burst?

Imagine it's a late summer evening and you are enjoying the falling temperatures in your area. Then, in the blink of an eye, a sudden high wind gust occurs. Simultaneously, the air temperature has climbed from 70 degrees to over 100 degrees. Suddenly, it feels like you are in an oven. What could have caused this rapid rise in temperatures this late into the night? The answer is a heat burst.

Heat bursts are a rare phenomenon, but they do occur occasionally. The portion of the country that sees them most often is along and off to the east of the Rockies in the western high Plains. In order for a heat burst to develop, a delicate recipe of atmospheric variables must align. The first needed entity is a high-based (or high-altitude) thunderstorm that is weakening and about to dissipate. Secondly, the air at the height of the thunderstorm and a layer below it must be extremely dry.

When rain falls out of a thunderstorm, a portion of the rain evaporates before hitting the ground. In order for raindrops to evaporate, warm air is absorbed into the raindrop as it turns into water vapor (latent heat absorption). This leaves the air around the evaporated raindrop cooler, and therefore, heavier than the air around it. The cool and dense air supports the downdraft. When a thunderstorm moves into extremely dry air, the amount of rain-cooled air near the base of the thunderstorm accumulates, resulting in an accelerating downdraft that eventually reaches the ground.

When downdraft speeds of a dying storm accelerate to speeds of over 60 mph, the air becomes compressed on its speedy descent. When air is compressed, it is heated (much like how the hose on a bike pump heats when you are pumping your bike tires). This explains the 30 degree plus temperature rises that can occur in the middle of the night during a heat burst. 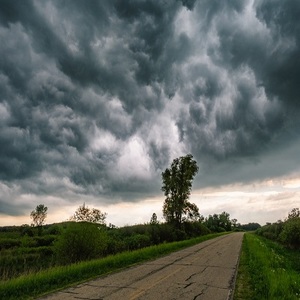 Heat bursts can on rare occasions be associated with a dissipating thunderstorm.
Next
Professor Paul Thursday - Chances of a White Christmas