Professor Paul Thursday - What is the Heat Index? | weatherology°
This website uses cookies to improve your user experience and for analytical purposes. By clicking the "Accept & Close" button, you agree to the storing of cookies on your device while using this site. Please see our privacy policy to learn more about how and why we use cookies.

Professor Paul Thursday - What is the Heat Index?

During the latest heat wave that much of the US endured, the heat index was a common and meaningful term that was used to describe the conditions. The heat index, like wind chill, is an 'apparent' temperature that describes how the conditions will actually feel to our bodies. Each year, heat waves are responsible for more deaths in the US than any other weather-related phenomenon. Last year, 118 deaths were attributed to heat. During the last 30 years, an average of 136 perish due to summer heat. Due to the danger that the combination of heat and high humidity brings each summer, it's important to understand what the heat index is and when it becomes increasingly dangerous.

When summer temperatures climb, the body's primary way to cool off is through perspiration.  The only way this process accomplishes the end goal of cooling the body off is when sweat is able to evaporate off the body. This is because, in order for water to evaporate, heat is absorbed by water from its surroundings, thereby leaving the original surface where the water was cooler. When humidity levels climb, this cooling process becomes increasingly inefficient and eventually fails entirely.

The heat index calculation takes in the current temperature and relative humidity in order to be solved. Since the early 1980's, this number has been used to gauge how difficult it will be for the body to cool itself by giving us an 'apparent' or 'feels like' temperature that is hotter than the actual temperature as humidity levels rise. When the heat index climbs over 100° Fahrenheit (F), heat stroke and heat exhaustion become a major concern to individuals outdoors, or those without air conditioning. One last thing to keep in mind is that the heat index is calculated for what it feels like in the shade, as being in direct sunlight will increase the heat index 15°F, on any given day.

Surprisingly, one of the highest heat indices ever recorded in the US occurred in Appleton, WI on July 13th of 1995. On this sweltering day, the temperature reached 101°F with a dew point of 90°F, resulting in a heat index of 149°F! 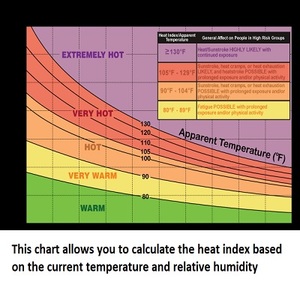