Professor Paul Thursday - So Why Did Pluto Get Demoted? | weatherology°
This website uses cookies to improve your user experience and for analytical purposes. By clicking the "Accept & Close" button, you agree to the storing of cookies on your device while using this site. Please see our privacy policy to learn more about how and why we use cookies.

Professor Paul Thursday - So Why Did Pluto Get Demoted?

The majority of the planets in our solar system were discovered from the 1800s to as far back as ancient times. The most recent discovery of a planet occurred on February 18th of 1930. On that day, an astronomer by the name of Clyde Tombaugh, made the discovery of a tiny distant planet with the help of a newly constructed telescope located at the Lowell Observatory in Flagstaff, AZ. This planet was named Pluto, after the ancient Greek god of the underworld.  Pluto was widely accepted by the scientific community as the 9th planet. Generations of children, including myself, grew fond of this icy planet on the outer frontier of our solar system. Had it not been for a fateful day in 2006, Pluto would be celebrating another anniversary of its planethood.

Unfortunately for Pluto, its status as our 9th planet was revoked on August 24th, 2006. This controversial decision was made by a panel of astronomers belonging to the International Astronomical Union (IAU). After much debate, the panel decided to revoke Pluto’s planet status and demote it to a dwarf planet. Let’s look into why this decision was made.

The IAU’s logic behind the decision was based on size. They decided that when it comes to being a planet, SIZE MATTERS. When a planet gets to a certain size, it clears out any space debris, such as asteroids, that are in its orbital path around the Sun. Pluto was always the smallest planet in our solar system, and is actually smaller than the Earth’s Moon and is only 1/6th the size of Earth. Because of Pluto's lack in size, it doesn't clean out a path through space as it orbits the Sun. This new rule of planethood took away Pluto’s classification of being the 9th planet in the solar system.

The debate on Pluto continues today as many alternative suggestions as to how planets should be classified have been submitted. Thus far, it seems that Pluto will remain a dwarf planet for the foreseeable future. For myself, and others who learned from the same textbooks I did, Pluto will still be remembered as a planet in our hearts.

Back in 2015, NASA’s New Horizons spacecraft made a groundbreaking flyby of Pluto. For the first time, high resolution images of Pluto were taken. In the next lesson, we will look into what this mission unearthed about what we thought was just an inert ball of ice. 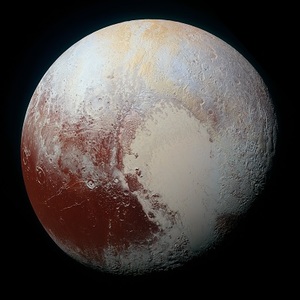 A picture of Pluto that was taken by the New Horizons spacecraft in 2015. Image Courtesy: NASA
Next
Professor Paul Thursday-Why The US Is A Hotbed For Tornadoes