Professor Paul Thursday-What Shapes Do Raindrops Come In? | weatherology°
This website uses cookies to improve your user experience and for analytical purposes. By clicking the "Accept & Close" button, you agree to the storing of cookies on your device while using this site. Please see our privacy policy to learn more about how and why we use cookies.

Much attention has been given to the study of snowflakes. The shape and size of snowflakes is so varied in nature that there really is truth to the saying that "no two snowflakes are alike." Meanwhile, the study into the shapes and sizes that raindrops come in may seem boring on the surface. Raindrops don’t have near the variation in their shape compared to snowflakes, but their shape is probably different from what you may believe them to be.

Unlike most of us were taught to believe, raindrops do not have a teardrop shape. Instead, most raindrops start off in a fairly spherical form. As one falls from the cloud to the ground, the shape will then change drastically. The two main forces that impact a raindrop are air resistance, or drag, and gravity. Large drops feel a greater amount of drag compared to smaller ones. Smaller drops fall slower than large drops, due to gravity.

A small raindrop’s fall speed is accelerated less by gravity, and the drag with which the drop experiences makes it fall even slower. Therefore, its shape will turn from a sphere at its start, to a slightly oblate sphere with a flat bottom and rounded top. However, the smallest drops will remain fairly spherical throughout their journey. Meanwhile, larger raindrops change shape more drastically due to the faster fall speed and the increased impact of drag due to their size. A large raindrop begins as a large sphere and then flattens out into more of a hamburger bun shape as it descends. The largest drops will oftentimes flatten so much that they split into multiple drops before reaching the ground.

Raindrop sizes range from as small as 0.02 inches in diameter (which we refer to as drizzle), to as large as a quarter of an inch. The smallest droplets will fall at a rate of around 2 mph while the largest raindrops can reach a terminal velocity up to 20 mph. Some of the largest raindrops ever measured have been nearly the size of a dime!

For a look at the actual shapes of rain drops, click here. 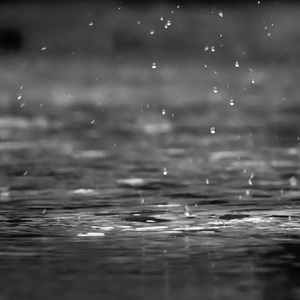 Raindrops come in much different shapes than most of us previously thought!
Next
Professor Paul Thursday - Why Do Leaves Change Color?