Professor Paul Thursday - Why Are There Tides? | weatherology°
This website uses cookies to improve your user experience and for analytical purposes. By clicking the "Accept & Close" button, you agree to the storing of cookies on your device while using this site. Please see our privacy policy to learn more about how and why we use cookies.

Professor Paul Thursday - Why Are There Tides?

Anyone who lives in a coastal region knows the importance of being cognizant of when high and low tide occurs. Whether navigating a ship to port or planning to enjoy a day at the beach, tides are important to everyday life. Folks that live on tidal islands see the biggest impact as they are actually cut off from land during high tides. This is the case for an island off the coast of England called St. Michael’s Mount in Cornwall. The high tides actually flood the causeway that serves as the connection to the mainland. Luckily, the island is home to an impressive medieval castle that can keep your attention while waiting for low tide. Although tides can seem a bit mysterious, they are as predictable as the rising and setting of the sun. Let’s dig into the forces that govern them.

Our understanding of the tides goes back to the 17th century thanks to Sir Isaac Newton. This is largely due to his theory of gravitation that stated that the force of gravity between two bodies is proportional to their combined masses and the distance between their centers. This law explained how the gravitational attraction between the Earth and the Moon acts to create the tides. This theory focused on how the gravitational pull between two bodies becomes stronger as the distance between them decreases. As the Moon orbits the Earth, its gravitational pull becomes strongest on the side it is closest to and weakest on the opposing side. This causes the oceans to "bow outwards" on the side closest to the Moon. When the ocean bows outward, the coastal regions on that side of the globe experience a rise in sea level (the second figure on the right illustrates this effect).

If the Sun were closer to Earth, it would have a much greater impact on the tides, due to its far superior size compared to the Moon. Since the Sun is 390 times further away from the Earth than the Moon, it can only have an "additive" effect when it comes to the tides. When the Earth, Moon, and Sun are aligned (as is the case during a full or new moon cycle) the high tides will be "higher" and the low tides "lower." This enhanced tidal cycle is called a spring tide (diagram on the bottom right). When the Sun and Moon are at right angles to one another, a weaker tidal cycle known as a neap tide occurs.

If you are wondering what region on Earth sees the most impressive tidal cycle, look no further than the Bay of Fundy in Nova Scotia. A high tide here can mean a 50 foot rise in sea level!

For a helpful illustration on how tides work, click here. 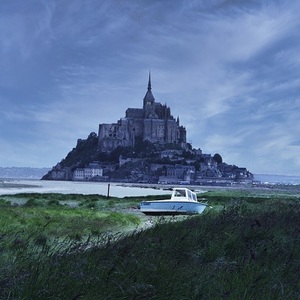 St. Michael's Mount tidal island located off of Normandy in France.
Next
The Drought Feedback Loop of Wildfires