Professor Paul Thursday - Snowiest Cities in the US | weatherology°
This website uses cookies to improve your user experience and for analytical purposes. By clicking the "Accept & Close" button, you agree to the storing of cookies on your device while using this site. Please see our privacy policy to learn more about how and why we use cookies.

Professor Paul Thursday - Snowiest Cities in the US

For parts of the country, snowy winters are the rule and not the exception. In this rating of snowy cities, a population center of at least a few thousand was needed in order to qualify.

Proximity to an ocean or large lake plays an important role in being in the running for this award. Another important factor is being in a location that is supplied with plenty of cold air, resulting in persistent subfreezing temperatures during much of the winter season. We will take a look at what cities have this ideal mix of moisture and cold air to take the trophy. Then we will also check out a reporting station in the continental US that might be the snowiest place in the world!

To find the highest average annual snowfall in all 50 states, one takes a close look at our 49th state. The southern portion of Alaska is full of snow-laden towns due to the inexorable push of moisture off the North Pacific, juxtaposed with the arctic air masses that reside inland. Another contributing factor is the orographic lift that occurs in the  mountainous terrain along the southern coast. Orographic lift occurs when moisture-rich air masses run into mountainous terrain and are forced upwards. This results in increased vertical motions and heavy, persistent precipitation patterns. A town that capitalizes on all of this is Valdez, Alaska. This town of nearly 4000 residents can brag about being the snowiest town in the US.  On average, its residents are subjected to just over 326 inches of snow each year. This immense amount of snow is due to the persistent Aleutian Low that sits over the North Pacific and pummels the region with numerous snow events each year.

In the lower 48, some of the snowiest towns are downwind of the Great Lakes. These inland seas retain the warmth of the warm season as arctic air masses drive southeast out of Canada during the fall and winter seasons. This temperature contrast draws moisture out of the lakes and deposits it in the form of lake-effect snow. Towns on the south and eastern shores will often see the most lake-effect snow pile up as the majority of arctic air masses head in from the north or west out of the Canadian Arctic. The snowiest town in the US receives much of its snow this way. Houghton, Michigan can boast of being the snowiest town in the lower 48. Annually, Houghton receives an average of 208 inches of snow. As a result, its nearly 8000 residents strive to find places to put all the snow each winter season.

Lastly, the snowiest point in the world is likely in the lower 48. Paradise Ranger Station located on Mt. Rainier in Washington State receives 56.3 ft, or just over 675 inches annually. With few full-time residents, it doesn't qualify for being the snowiest town, which comes as no surprise given the astronomical amount of snow that buries the region each season. 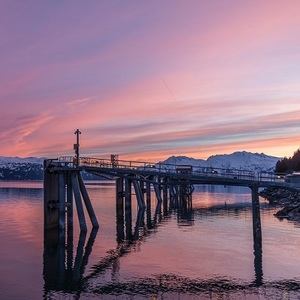 Valdez, Alaska receives an average of 326 inches of snow annually

Houghton, MI has an average annual snowfall of 208 inches 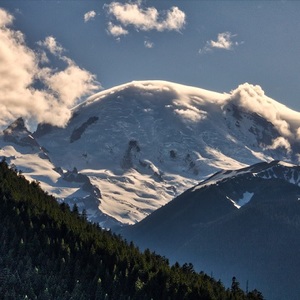 Mt. Rainier National Park may be the snowiest place on Earth!
Next
Wildlife Wednesdays: Arctic and the Arachnids