Professor Paul Thursday - Air Travel And Deicing | weatherology°
This website uses cookies to improve your user experience and for analytical purposes. By clicking the "Accept & Close" button, you agree to the storing of cookies on your device while using this site. Please see our privacy policy to learn more about how and why we use cookies.

AAA estimates that nearly 4.5 million folks will be traveling by air this Thanksgiving season. Delayed flights are always of concern this time of year, and one of the more common delays occurs when your plane needs to be deiced before takeoff. Although delays are never fun, making sure there is no ice on an airplane is integral to keeping air travel safe.

Accumulation of ice on a plane is a major hazard as it greatly reduces lift. Just a millimeter of ice on an airplane wing can reduce the lift it produces by 25%. Any snow or even frost accumulation on an airplane has similar consequences. When anything accumulates on especially the wings or tail of an airplane, the ability for air to flow across their surfaces is compromised, thereby decreasing the amount of lift that can generated as the airplane accelerates.

Obvious times when deicing is needed is when snow, freezing rain, or sleet is falling during a winter storm. However, precipitation does not need to be falling for deicing to be needed. The less obvious icing of airplanes occurs up at cloud level. Clouds that form in a layer of the atmosphere with a temperature between 32F and -4F are the biggest concern for ice accumulation. This is because clouds in this temperature range have the largest population of supercooled droplets. Supercooled droplets are water droplets that are below freezing, but haven’t yet found a nuclei to freeze onto. Therefore, when an airplane flies through these types of clouds, the supercooled droplets will tend to freeze onto parts of the plane.

When snow or ice does accumulate, a heated solution, made of glycol and water, is sprayed onto the plane. When a higher concern for icing exists, a solution with a higher ratio of glycol is sprayed on the aircraft after the initial deicing is complete. This second application has some ability to prevent ice from reforming for a certain time frame after it is sprayed.

Wishing you a Happy Thanksgiving from all of us at Weatherology! 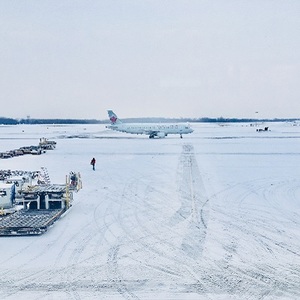 Airplane wings are typically sprayed with deicing fluid during the winter.
Next
The 2018 Redding Firenado