Professor Paul Thursday - Straight-Line Winds Explained | weatherology°
This website uses cookies to improve your user experience and for analytical purposes. By clicking the "Accept & Close" button, you agree to the storing of cookies on your device while using this site. Please see our privacy policy to learn more about how and why we use cookies.

Understanding the basic anatomy of a thunderstorm and the vertical wind currents that occur within is integral in gaining an understanding of how straight-line winds develop. When a thunderstorm develops, a localized rising current of air, known as an updraft heads skyward. At this point, an observer would notice a growing cumulus cloud. When adequate moisture is present at the surface and a favorable environment exists higher in the atmosphere, the cloud updraft will increase in velocity, and a towering cumulus cloud will be seen. As the thunderstorm matures, rain begins to fall to the ground. As the rain droplets fall, air is dragged downward with them. This downward directed current of air is known as a downdraft (the opposite direction of an updraft). Meanwhile, as the edges of the storm interact with dry air that is surrounding it, some raindrops evaporate. Because evaporation is a cooling process, the pocket of air where the raindrops have evaporated becomes cooler than the air surrounding it. Because cool air is more dense than warm air, this cooled pocket of air accelerates downward. It is these two processes that work together to create the downdraft portion of the storm. For a time the updraft and downdraft will co-exist in harmony, but at some point the updraft will get overtaken by the downdraft, and at that point the storm will fizzle out.

Now that you understand the basic structure of a thunderstorm, let's look at how this relates to the formation of straight-line winds. When the environment is favorable for strong thunderstorms, updraft and downdraft speeds can exceed 100 mph. Meanwhile, intense downdraft winds, also known as microbursts, drive down to the surface and then spread out. As the wind spreads out horizontally over the land, straight-line winds are experienced. The image below depicts this process as a microburst is shown accelerating to the ground and then spreading out horizontally, resulting in straight-line winds. As the wind travels across the surface it will at first be intense, but as it travels further, the effects of friction at the surface will slow it down. For this reason, damage from microbursts can be fairly localized at times.  However, during favorable atmospheric conditions, organized storm complexes can produce straight-line winds for 100's of miles.

The safety protocol for straight-line winds is the same as you would follow for a tornado. This is because straight-line winds can uproot trees, toss various debris airborne, and cause damage to standing structures. For this reason, it is advised that you stay away from windows and go to the lowest level of a home or business. Always seek an interior room on the lowest level, which is typically a bathroom or hallway. If you have no access to a shelter, the best option is to seek an open area away from trees or other structures that may fall on you. So the next time you hear that straight-line winds are approaching, seek shelter and ride the storm out in safety.

For a visual on how a microburst can produce straight-line winds at the surface, click here. 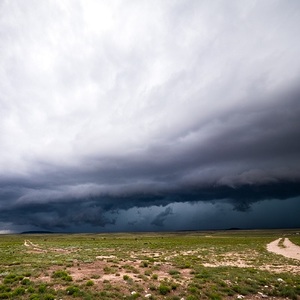 One of the more common dangers associated with thunderstorms is straight-line winds.
Next
Professor Paul Thursday - Why Do Leaves Change Color?