Professor Paul Thursday - What Are the Dog Days of Summer? | weatherology°
This website uses cookies to improve your user experience and for analytical purposes. By clicking the "Accept & Close" button, you agree to the storing of cookies on your device while using this site. Please see our privacy policy to learn more about how and why we use cookies.

Professor Paul Thursday - What Are the Dog Days of Summer?

All of us have heard the phrase "dog days of summer" used as we get into each summer season. When most people think of the dog days of summer, they think of those long, hot summer days that are best spent at a nearby lake or pool. Others may think there is a correlation to our canine friends who struggle to stay cool during those extended bouts of heat. The phrase was actually first used by Ancient Greek and Roman cultures, and has its roots in astronomy.

The brightest star in the night sky is Sirius, which is the primary star in the constellation known as Canis Major, or big dog. For this reason, Sirius is oftentimes referred to as the "dog star." Ancient civilizations were much more in tune to seasonal changes in the night sky than we are today. They noticed that the position of Sirius during July and into August was fairly in sync with the rising of the sun, as they noticed it appeared in the eastern sky in the predawn hours. Since Sirius gives off so much light, they assumed that heat from the star made it to Earth, resulting in the hottest days of summer. Homer even spoke of the rising of the "dog star" in the Iliad as a bad omen that would bring fever and suffering to all of humanity.

If Sirius were closer to Earth, this might be the case, as Sirius has a surface twice as hot as the Sun and it is double the size. However, Sirius is a whopping 8.6 light years from Earth, while the sun is .00001581 light years away (a light year is the distance light travels in one year, which is roughly 6 trillion miles).

The portion of the summer that surrounds the time when Sirius rises with the sun is from July 3rd through August 11th. For many areas of the country, the hottest time of the year does fall into this time frame, but the reason is that the days are still much longer than the nights heading into July. This results in a larger amount of heat being gained rather than lost in the Northern Hemisphere during this time. 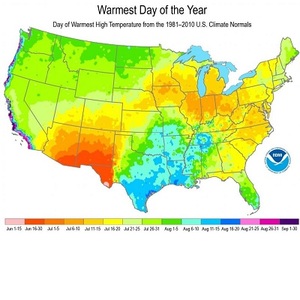