Professor Paul Thursday - What Is The ITCZ? | weatherology°
This website uses cookies to improve your user experience and for analytical purposes. By clicking the "Accept & Close" button, you agree to the storing of cookies on your device while using this site. Please see our privacy policy to learn more about how and why we use cookies.

Professor Paul Thursday - What Is The ITCZ?

When we think of the weather in the tropics, we think of sunshine and warmth, broken up by intermittent rain showers. This can hold true to course during certain points of the year, but for tropical locations closer to the Equator there are times of the year when persistent bands of showers and storms can be expected for weeks on end. Rainy seasons occur during certain points of the year closer to the Equator due to the location of a zone known as the Inter-Tropical Convergence Zone (ITCZ).

The main driver of the Inter-Tropical Convergence Zone is the powerful sunshine that is experienced along and near the Equator. The Sun is more powerful here because of its location in the sky. Here the sun travels in an arc each day that reaches directly overhead at certain points of the year, meaning it is at nearly a 90 degree angle with the surface. Because of this, an intense amount of energy reaches the lower atmosphere, heating the ground or ocean surface. The heat that collects on the surface of the land and ocean conductively warms the air just above it. When air heats up, it becomes very light (like helium gas) and buoyant. In addition, the trade winds that collide along the Equator play an important role. To the north, the trade winds blow in from the northeast. Meanwhile, south of the Equator, the trade winds blow in from the southeast. When these converging surface winds meet, the air pushes upward (much like how two tectonic plates that push into each other will form mountains). The result of the converging trade winds along a region where the air is very light and buoyant is that it easily forces the air upwards, resulting in clouds and precipitation.

The ITCZ is seen on satellite images as a narrow belt of clouds and precipitation that circles the Earth. The location of this belt of rain and thunderstorms does migrate as much as 20 degrees north and south of the Equator. The reason for the migration of the ITCZ is that it gravitates to where the Sun is strongest. In the Northern Hemisphere winter, the ITCZ migrates south of the Equator. Then, during the summer it pushes north of the Equator. Areas in northern South America and central Africa experience alternating wet and dry seasons based on the migrating ITCZ throughout the year.

Click here for a satellite image that shows the ITCZ. It is seen as the patch of clouds that runs west to east near the Equator.   https://eoimages.gsfc.nasa.gov/images/imagerecords/0/703/itcz_goes11_lrg.jpg 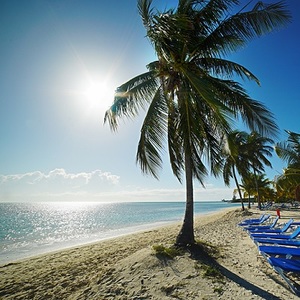 The ITCZ sets up in a zone along or just north and south of the Equator.
Next
Professor Paul Thursday - What Are The Roaring 40s?