Prehistoric Megafloods | weatherology°
This website uses cookies to improve your user experience and for analytical purposes. By clicking the "Accept & Close" button, you agree to the storing of cookies on your device while using this site. Please see our privacy policy to learn more about how and why we use cookies.

Around the end of the last Ice Age, between 18,000-15,500 years ago, a series of megafloods, some of the largest such events for which geologists have found evidence, occurred in Washington State and portions of Oregon in the northwestern United States. Having been studied and debated by geologists over the past 100 years, new discoveries are still being made concerning these cataclysmic events, with the advent of new computer flood models.

As the immense Cordilleran ice sheet, which had covered much of northwestern North America during the Last Glacial Maximum began to melt and retreat northward around 20,000 years ago, a lobe of this ice sheet remained in the Idaho panhandle in the Clark Fork Valley. This lobe of ice effectively dammed any glacial melt water from escaping downstream forming the huge Glacial Lake Missoula in western Montana, which was the size of Lake Erie and Lake Ontario combined. As the glacial melt water gradually built up to a depth of around 2,000 ft (610 m) the pressure at the bottom of the lake became so immense that it lowered the freezing point of the water enabling water to enter tiny cracks in the ice dam. Over time, the friction of the water flowing into these cracks created enough heat to melt the edges of the ice and create even more cracks, which only continued this feedback loop. When the ice dam finally gave way, it unleashed a cataclysmic megaflood traveling at up to 80 mph (130 km/h) and unleashing 90 times more energy than the most powerful nuclear weapon ever detonated. The flooding inundated much of eastern Washington and western Oregon.

This flood wasn't a singular incident, either. Over a period of a couple thousand years, geologists have found evidence for dozens of such megafloods, not only coming from Glacial Lake Missoula, but also from the nearby Glacial Lake Columbia.

Using computer models to simulate these megafloods, a team of researchers headed by Tamara Pico of UC Santa Cruz found another surprising aspect concerning these glacial floods. The Cordilleran ice sheet was so heavy that it actually deformed the Earth's crust in the region, changing the elevation of the surrounding topography by hundreds of meters as the ice sheet went through cycles of melting and reforming. The research team found that in order to cause the pattern and location of erosion seen in the landscape today, this massive crustal deformation played an important role in determining the exact path that the floodwaters followed. 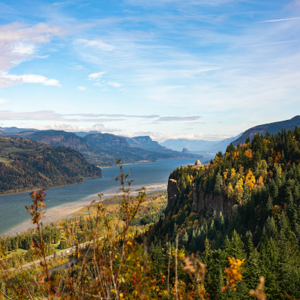 The Missoula megafloods would have roared through the Columbia River Gorge, seen here near present day Corbett, Oregon. 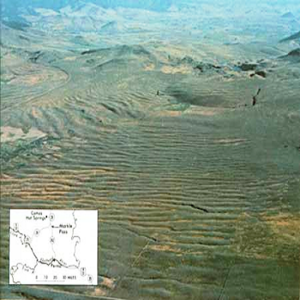 The megafloods left behind these giant ripple marks up to 35 feet high near present day Hot Springs, MT - Courtesy of the U.S. Geological Survey
Next
Professor Paul Thursday - What is the Heat Index?