Professor Paul Thursday - Lakes of Molten Lava | weatherology°
This website uses cookies to improve your user experience and for analytical purposes. By clicking the "Accept & Close" button, you agree to the storing of cookies on your device while using this site. Please see our privacy policy to learn more about how and why we use cookies.

When one thinks of lakes on Earth, freshwater lakes are the first that come to mind. A type of lake in which you may or may not be familiar is a basin that is filled with molten lava that can be hotter than 2300 degrees Fahrenheit. These type of lakes are extremely rare and oftentimes confirmed via the use of satellite imagery.

It is no surprise that lava lakes form in the vicinity of active volcanoes. However, what makes a lava lake extremely rare is the fact that most lava that is spewed by vents in the Earth's crust eventually cools enough for it to become solidified, thereby turning into rock. There are rare instances where the flowing lava collects into a crater that is fed by a steady stream of volcanic gases, such as sulfur. When this happens, the collection of lava can stay at least partially molten permanently.

With the use of satellites that detect heat on the Earth's surface, the location of lava lakes can be identified. There are currently eight known lava lakes on Earth. These are located on various volcanoes across the world. One of the more famous lava lakes is located on Mount Kilauea, located on the Big Island of Hawaii. Others are located near volcanoes in Congo (Mount Nyiragongo), Ethiopia (Erte Ale), Antarctica (Mount Erebus), Vanuatu (Mount Yasure and Ambrym) and Nicaragua (Mount Masaya). The largest lava lake in the world is in Congo on Mount Nyiragongo. That particular lava lake measures around 820 feet in diameter, with depths as low as 2000 feet.

The image below shows the most recently discovered lava lake, located on Mount Michael, on Saunders Island (located around 1000 miles east of the southern tip of South America). 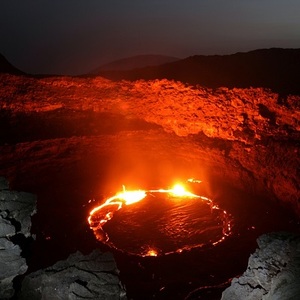