Professor Paul Thursday- What Is A Rain Shadow? | weatherology°
This website uses cookies to improve your user experience and for analytical purposes. By clicking the "Accept & Close" button, you agree to the storing of cookies on your device while using this site. Please see our privacy policy to learn more about how and why we use cookies.

Professor Paul Thursday- What Is A Rain Shadow?

Living in the shadow of a mountain range has many impacts on local climate. Anyone who has taken a road trip to the western US has likely seen the outward impacts of the "rain shadow effect." As one heads east down a mountain slope the terrain can go from lush and green, to barren and desolate along the descent. The reason for this sharp contrast in terrain can be explained by the local precipitation patterns that occur due to effects of the rain shadow.

The jet streams in the Northern Hemisphere blow from west to east, which pushes weather systems eastward across the country. These prevailing winds drive low pressure systems in from the Pacific Ocean across the US. When the lows hit the West Coast they run into some impressive mountain ranges, such as the Cascades of Washington State and Oregon as well as the Sierra Nevada Range in California. As the prevailing winds run into the mountains, the moist Pacific air is forced upward. This results in the air cooling to the point where the water vapor condenses, forming clouds and then precipitation. When the once moist Pacific based winds start to descend on the eastern side of the mountain range, much of the available moisture has been precipitated out. Even when there is leftover moisture, it is unable to precipitate out due to the compressional warming that occurs as the air descends down the east side of the mountain range. Anyone who has pumped a bike tire and felt the bike pump heat up has felt the effects of compressional warming firsthand. The rising temperatures on the east side of the mountain range results in lowering relative humidity values, which breaks up the cloud cover and the prospect for any precipitation to occur.

Many of the desert areas around the world exist due to the rain shadow effect. Death Valley, California is sandwiched between the Panamint Range to the west and the Amargosa Range to its east. This combined with the fact that Death Valley is the lowest spot in North America, results in a region that stays clear of precipitation most of the year. 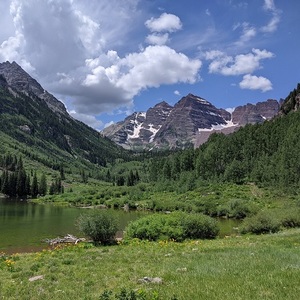 Any region on the east facing side of a mountain range can be subject to a rain shadow effect.
Next
Terrific Trees