Professor Paul Thursday - What is a Rip Current? | weatherology°
This website uses cookies to improve your user experience and for analytical purposes. By clicking the "Accept & Close" button, you agree to the storing of cookies on your device while using this site. Please see our privacy policy to learn more about how and why we use cookies.

Professor Paul Thursday - What is a Rip Current?

As the weather starts to warm up more consistently in the spring and summer seasons, beaches around the country become popular places to beat the heat. Most avid beachgoers have probably heard of rip currents, but may not know exactly what they are and how to best avoid them. Statistically, rip currents are the fourth deadliest aspect of weather each year. Over the past decade, heat, wind, and flooding have each taken more lives annually. Meanwhile, rip currents have taken an average of 58 lives a year. Last year was unfortunately a more deadly year for rip currents, as 71 people lost their lives to them. Let's look into how rip currents develop and what safety precautions should be taken around them.

Rip currents are common dangers for folks swimming in any beaches along the ocean, or one of the Great Lakes. These large bodies of water are susceptible to strong rip currents when there is heavy wave action beating against the shoreline. When heavy wave activity is present, large amounts of water are transported along the the shorelines. This volume of water that accumulates along the shore then has to flow away from the shore back out to sea. This process is accomplished through the formation of rip currents. Rip currents are basically rivers of water that flow from near the beach back out to sea. These channels can be as narrow as 10 feet to as large as 100 feet in width. The speed at which these channels flow back out to sea can be as swift as 8 feet per second. To put it into perspective, Michael Phelps' top speed is only slightly faster than 8 feet per second. That being said, even the most accomplished swimmers can be taken away by these currents.

There are some things that you can do to stay safe from the dangers of rip currents. First of all, unless you are an accomplished swimmer, stay close to the shore during days when there is substantial wave action. Be cautious when swimming near sandbars, piers, and jetties, as they can act to focus rip current activity near them. Secondly, there are some signs you can look for that can help you identify where rip currents are occurring. The second image below is a prime example of how a rip current can be spotted. Notice where there is a gap in the breaking wave out from the shore. That gap between the breaking waves is due to the presence of a rip current. The rip current is channeling water away from the shore out to sea, which produces this gap in the incoming waves. The last thing to know is that if you should ever get caught in a rip current, try not to panic and swim parallel to the shoreline until you feel yourself get out of the rip current. Once you have made it out of the rip current, you can then swim back to shore. Be safe and enjoy your days at the beach this season. 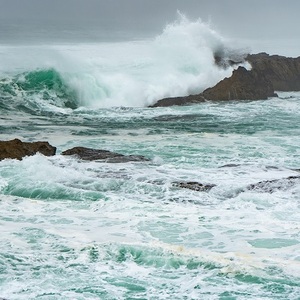 When there are choppy conditions along the shoreline, rip currents are always present.
Next
Mountain Snowpack – A New Estimate