Professor Paul Thursday-What Is A Tornado Vortex Signature? | weatherology°
This website uses cookies to improve your user experience and for analytical purposes. By clicking the "Accept & Close" button, you agree to the storing of cookies on your device while using this site. Please see our privacy policy to learn more about how and why we use cookies.

Before 1970, weather radars around the U.S. were referred to as "conventional radars." Conventional radars can detect bands of precipitation via radar reflectivity, but they are unable to provide any velocity data. The first Doppler radar dedicated to weather wasn't installed in the U.S. until 1971. This occurred in Norman, OK. The new Doppler technology proved to be so useful at looking into the different features of a thunderstorm, that they were eventually installed all over the U.S. during the late '80s and early '90s. These radars are referred to as WSR-88D, and are still in use across the country today.

With the improvements in Doppler radar technology, meteorologists were now able to analyze velocity data when looking at a thunderstorm. When radar beams penetrate a storm, some of the energy bounces off of the raindrops and gets reflected back to the radar site, which gives reflectivity data. Doppler radar is not only able to decipher where rain is occurring, but it can also decipher whether the raindrops are moving towards or away from the radar site. It does this by taking note of the frequency shift in the radar returns. This frequency shift is felt firsthand when you compare the noise of police sirens coming at you, as opposed to when they are going away from you. You will notice that the noise of the siren is a higher pitch (or frequency) when it is moving towards you as opposed to away. Doppler radar uses this concept to find storm motions within a thunderstorm.

Doppler radars are programmed with a series of algorithms that can flag certain areas of the storm that show rotation. This is inferred by the radar when raindrops in the storm are detected as moving towards and away from the radar site in a small couplet. When the area of rotation is strong enough and is estimated to have a radius of around a mile or less, the radar places a TVS on the display. The existence of the TVS is by no means a guarantee that a tornado is present, but it does warn the radar operator to closely watch and analyze that portion of the storm.

For a look at radar data that shows a TVS click here. 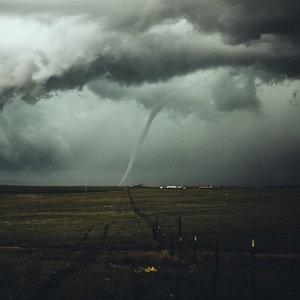 The TVS signature helps meteorologists identify where tornadoes may be occurring within a storm cell.
Next
Wildlife Wednesdays: PPE Trash is Littering Our Oceans