Professor Paul Thursday - What Are Rogue Waves? | weatherology°
This website uses cookies to improve your user experience and for analytical purposes. By clicking the "Accept & Close" button, you agree to the storing of cookies on your device while using this site. Please see our privacy policy to learn more about how and why we use cookies.

Imagine yourself on a body of water sailing along on a day with light to moderate wave action. Then, without warning, an enormous wave comes in and overtakes your vessel. Hopefully, you were able to react favorably to the freak wave and avoid capsizing. This type of scenario describes what it would feel like to experience a rogue wave. Throughout history, there have been countless stories passed down by sailors of these sudden walls of water. Only during the last few decades, has this marine lore turned into a segment of oceanography.

So, how are these anomalously high waves thought to form? Research has shown a few scenarios that produce a higher risk for their formation. The distance from two adjacent wave crests (center of the wave ridge) is known as the wavelength. If the wavelength decreases, there is more risk of adjacent waves joining each other to form a much higher wave. This has been found to occur when high wave action driven by the prevailing winds runs into a part of the world that has a strong ocean current. In general, when any ocean current is traveling in a direction opposite the prevailing wave action, the waves will steepen, as their energy is compressed. This type of situation stirs up more turbulence in the water, resulting in turbulent eddies as well. This can result in even more chaotic wave action.

Next time, we will look into where some of the largest rogue waves have been measured in history! 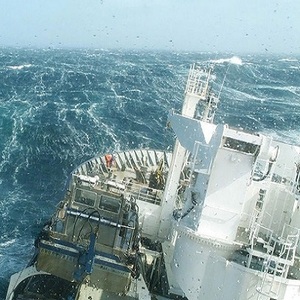 Rogue waves are thought to be the the blame of many shipwrecks in history.
Next
Fulminology