Screaming Skies | weatherology°
This website uses cookies to improve your user experience and for analytical purposes. By clicking the "Accept & Close" button, you agree to the storing of cookies on your device while using this site. Please see our privacy policy to learn more about how and why we use cookies.

Art has been called a "window to the soul". New analysis of one of the most famous works of art of the late 19th and early 20th century, The Scream by Edvard Munch, shows that some art may also be a window to past weather phenomena.

Munch’s The Scream is a mixed media work characterized by an open-mouthed figure in the foreground, with hands raised to the side of the face or ears, against the backdrop of a vivid, multi-colored, wavy sky with dark fjord below. Contrary to popular belief, the artist didn’t intend to depict the figure in the piece as screaming, but instead reacting to a sky that “was screaming blood and fire,” according to his diary entry from January 1892. A couple of theories have been put forth as to what caused the vivid sky conditions that Munch observed back in 1892, including a volcanic sunset or more recently, nacreous clouds.

Nacreous clouds, or mother-of-pearl clouds, are iridescent, high-level clouds that occur almost exclusively in the stratosphere in winter. They are most common over the polar regions, though they can sometimes be seen over Scandinavia, Iceland, Alaska, and Northern Canada when the temperature in the lower stratosphere is cold enough (below −108 °F).

A 2018 analysis by scientists at Rutgers, the University of Oxford, and the University of London makes the case for The Scream to be the earliest depiction of nacreous clouds, rather than a volcanic sunset. First, the vivid sunset aftereffects of the Krakatoa eruption of 1883 had long since disappeared from the sunsets over Europe by the early 1890s. Also, analyzing both the color and waviness of the sky in Munch’s work alongside modern photos of volcanic sunsets and nacreous clouds, the team showed that the color spectrum in the piece most closely resembles that of nacreous clouds at sunset, with their undulations and multi-colored, sometimes iridescent appearance. 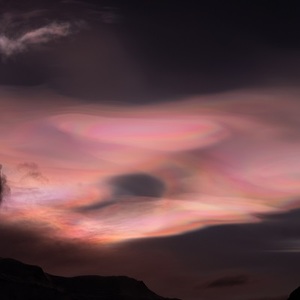 Nacreous clouds occur most often at high latitudes, such as these over Iceland 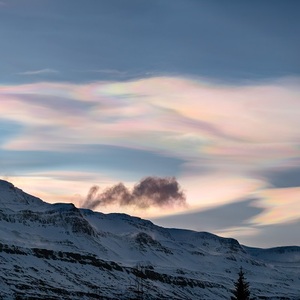 Nacreous clouds are usually most vivid around or just after sunset 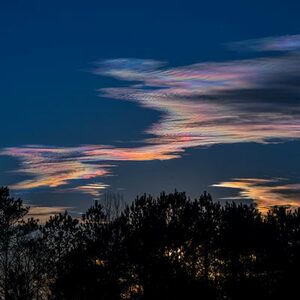 Lower altitude clouds can also have iridescence, but these are not the high-altitude nacreous clouds
Next
Exoplanet in a Galaxy Far, Far Away