Discovery in the Depths | weatherology°
This website uses cookies to improve your user experience and for analytical purposes. By clicking the "Accept & Close" button, you agree to the storing of cookies on your device while using this site. Please see our privacy policy to learn more about how and why we use cookies.

Discovery in the Depths

Sometimes in science, discoveries get made by accident, or even when looking for something completely different. Such was the case during a recent dive to the deepest known shipwreck, the USS Johnston, which lies more than 20,340 ft (6,200 m) below the surface of the ocean in the Philippine Trench. It was at these extreme depths that a two-person submersible piloted by American investor and retired U.S. Navy Commander, Victor Vescovo, recorded footage of the deepest known squid, a full 30% deeper than any had been observed before.

The main objective of the mission wasn't looking for such a squid, but instead to locate a portion of the wreck of the Johnston that was beyond the reach of a previous mission which used a remotely operated vehicle. Upon reviewing the footage from the mission, though, Alan Jamieson, with the University of Western Australia Deep-Sea Research Centre, noticed a faint form moving above the seemingly endless stretches of mud on the ocean floor. After sending this footage to a zoologist at the Smithsonian Institution, the verdict was that the cameras had filmed a magnapinnid, also known as a bigfin squid.

Bigfin squid are rarely-seen creatures, with scientists knowing very little about them, even how exactly they feed. They are named for the large fins which protrude from their mantle, which they flap in order to slowly move through the depths. Extending below their mantle are extremely long tentacles which can grow to 13 - 26 ft (4 - 8 m) in length.

The specimen that the team observed was relatively small in size at 4 in (10 cm) in length, thus the researchers think that could mean it was a juvenile. Still it's a significant find as squid require prey to feed upon, suggesting more life yet to be discovered in what was once thought to be just a lifeless abyss. 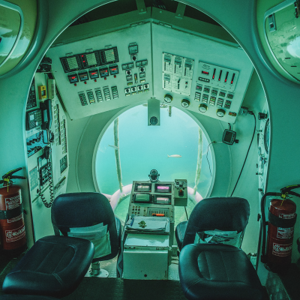 The mission was carried out in a two-person submersible 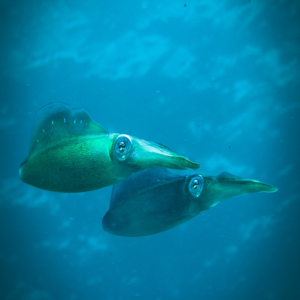 Unlike these squid from shallower depths, the bigfin squid has much longer tentacles that can reach up to 26 ft in length
Next
A Watery Beginning