Professor Paul Thursday - What Is A Dryline? | weatherology°
This website uses cookies to improve your user experience and for analytical purposes. By clicking the "Accept & Close" button, you agree to the storing of cookies on your device while using this site. Please see our privacy policy to learn more about how and why we use cookies.

Professor Paul Thursday - What Is A Dryline?

When looking at a weather map, some of the most recognizable features are low and high pressure systems along with warm and cold fronts. Another type of surface front that may be less familiar is known as a dryline. Drylines are a common surface feature for areas just east of the Rockies in the Plains region. During the spring and summer months, they can commonly be found across areas from the Dakotas southward through Texas.

As the name suggests, a dryline marks the boundary between humid, Gulf of Mexico-based air masses, and dry, desert-like air masses that develop in the lee of the Rockies. It is well known that boundaries, such as cold and warm fronts, are oftentimes associated with precipitation. Drylines also fall into this category.

One of the things that aids in creating upward lift along any type of surface boundary is a convergence of surface winds. Oftentimes, the winds will be from the west behind a dry line and out of the south ahead of it. This convergence of the winds creates a pile up of air at the surface that eventually ascends. The ascent is accelerated due to the fact that humid air is lighter, and more buoyant than dry air. Therefore, as the dry air converges with the humid air just east of the dryline, the humid air becomes much lighter than the dry air in the vicinity, creating upward vertical motions. In the proper setup, these upward motions can spawn strong to severe thunderstorms at times during the spring and summer seasons across the Plains.

The biggest difference between a dryline and a cold or warm front is that regional temperatures don’t give a major clue as to where they are located. If there is a temperature contrast, it will actually be warmer to the west of a dryline. This is because dry air masses heat up more easily than humid ones. Instead, the location of the dryline is found by pinpointing where a sharp change in dew point temperatures occurs. Dew point temperatures will, at times, drop from the 80s down to the 20s or 30s when a dryline passes through!

For a satellite image of how one can identify a dryline, click here. Notice how the cloud cover becomes absent behind the dryline. 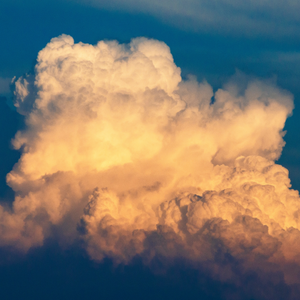