Power from the Earth | weatherology°
This website uses cookies to improve your user experience and for analytical purposes. By clicking the "Accept & Close" button, you agree to the storing of cookies on your device while using this site. Please see our privacy policy to learn more about how and why we use cookies.

Power from the Earth

Geothermal energy being used as a resource is not a new concept. In fact, since Paleolithic times hot springs have been used for bathing and since the days of the Roman empire for heating buildings. Today, many buildings are heated and even cooled with geothermal heat pump systems, which are now coming into the price range of individual homeowners. In the 20th century, this thermal energy from deep within the Earth began to be used to generate electricity via steam-driven turbines. A recent development called a sensitized thermal cell may even eventually allow the conversion of this geothermal energy directly into electric power.

Currently, using geothermal energy for power generation is really only feasible at the industrial scale.  Wells need to be drilled thousands of feet to even over a mile deep. At this depth, especially near fault lines, underground water gets superheated to around 360 °F or more. As this superheated water is drawn to the surface through the well, the pressure decreases and some of the water turns into steam. This steam is then used to drive a turbine and generator to make electricity. The leftover water and steam are then condensed and injected back into the ground. This is called a flash steam power station. In the newer style of geothermal power station, called binary cycle, water that is only moderately hot, as low as 134 °F, is pumped to the surface. This water then heats a secondary fluid which has a much lower boiling point than the water and causes it to vaporize. This secondary vapor is then used to drive the turbine and generator.

The newest breakthrough, which looks to bypass the use of geothermally-heated water completely, is the sensitized thermal cell (STC). Still largely in the experimental stage, a team of scientists from the Tokyo Institute of Technology were able to convert heat directly into electric power with the battery-like STC device. In the three-layered STC, heat excites electrons in the semiconductor layer to a high-energy state causing them to transfer to the electron transfer layer. The electrons then pass via one electrode to an external circuit which carries them to an opposite electrode, before passing into a solid electrolyte. Redox reactions in the electrolyte carry low-energy electrons back into the semiconductor layer for the cycle to start over again. The heat necessary for the tested STC to work is less than 212 °F. Again, if fully developed for industrial-scale power generation, STC's would present an attractive alternative to the wells, pumps, and turbines needed for today's geothermal power stations. 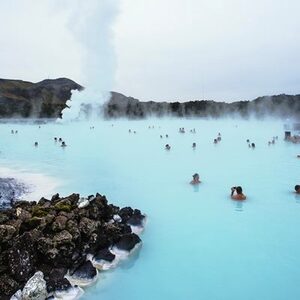 Bathers in a hot spring in Iceland 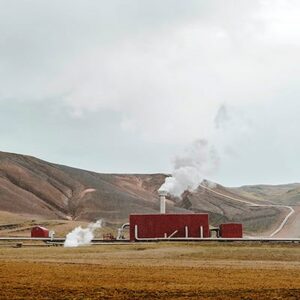 Geothermal power plant in Iceland
Next
The Olympics of Recycling