Professor Paul Thursday - La Niña and the Hurricane Season | weatherology°
This website uses cookies to improve your user experience and for analytical purposes. By clicking the "Accept & Close" button, you agree to the storing of cookies on your device while using this site. Please see our privacy policy to learn more about how and why we use cookies.

Most of us have heard the term El Niño, also referred to as “the Nino” during a classic Chris Farley SNL skit. This year, a La Niña event has formed over the equatorial Pacific Ocean and is expected to continue throughout the upcoming winter season. La Niña and El Niño are the two opposing phases that occur in the climate pattern known as the El Niño Southern Oscillation (ENSO).

The main driver of this climate pattern is changes in the surface winds that occur over the equatorial Central and Eastern Pacific Ocean every 3 to 7 years. Normally, this area near the equator experiences northeast winds, known as the trade winds. These surface winds act to push water away from the northwest coast of South America westward. As this happens, deeper, cooler water from below comes up to the surface. This process is known as upwelling.

During years where the trade winds shut off, the waters of the equatorial Pacific Ocean west of northwestern South America become abnormally warm. This is what happens during an El Niño phase. Conversely, during years when the strength of the northeast trade winds increases, the amount of upwelling increases. This brings a surplus of cool ocean water from below to the surface, resulting in anomalously cool sea surface temperatures.

This shift in ocean temperatures along the equator results in changes in rainfall patterns that have a trickle down effect on the weather in other areas across the globe. First off, rainfall patterns change based on wherever the warmer than average ocean temperatures are found near the equator. During a La Niña phase, below average rainfall and temperatures occur along the northwest coast of South America while above average rainfall occurs west from northern Australia up through the Philippines.

This shift in rainfall patterns impacts the climate of the U.S. in a few ways. Unfortunately, this results in weaker wind shear downstream over the Caribbean Sea and eastward across the Atlantic Ocean. Weaker wind shear supports the development of hurricane activity, which will aid in keeping an active season going into the fall.

Meanwhile, during the winter season, the impacts of La Niña can also shift the climate over North America. Next week’s lesson will dive into how the upcoming winter may be impacted over the lower 48.

For a look at how ocean temperatures vary during the ENSO cycles, click here. 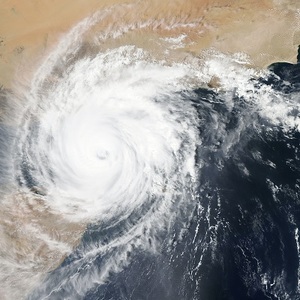 La Niña and El Niño events can impact the frequency of hurricanes in the Atlantic Ocean.
Next
Professor Paul Thursday - The Meteotsunami Explained