Professor Paul Thursday-Anniversary Of Mataafa Storm Of 1905 | weatherology°
This website uses cookies to improve your user experience and for analytical purposes. By clicking the "Accept & Close" button, you agree to the storing of cookies on your device while using this site. Please see our privacy policy to learn more about how and why we use cookies.

Back in the early 1900s, the shipping industry that operated over the Great Lakes was at its height. Steamships carrying iron ore, lumber, and grain sailed up and down the lakes during the roughly eight month season that was hoped for each year. The port of Duluth, MN was so busy, that by 1904, it surpassed London as the second busiest port in the world based on tonnage. Only New York remained on top of the fast growing port city of Duluth. During this peak in shipping, the weather could not have been more inhospitable than it was in 1905. For Lake Superior, the loss of lives and property are still unmatched. 60 sailors lost their lives, while 21 boats were damaged to the point of being a total loss.

In the early 1900s, weather observations were sparse and meteorologists had to piece together a forecast from the spotty data that was available. Looking back, much respect goes back to these pioneers in the field. Forecasts were largely made based on gut feelings and past events. The Weather Bureau (precursor to the current day National Weather Service) had just become established in Duluth in 1904. One of its most important duties was alerting the captains of upcoming storms.

On November 24th, of 1905,  a major November storm brought hurricane-force wind gusts over Lake Superior for several hours. Based on past experience, the captains that stayed in port during this storm judged that calm weather would have to follow for some time after it. Unfortunately, an even more deadly storm was brewing over the Plains. Heavy snow and high winds were reported in the Dakotas by the 26th. The Weather Bureau, led by Herbert Richardson at the time, put out storm flags to warn the captains of another incoming major storm. Unfortunately, many ignored them, as the pressure of completing the season’s last loads weighed heavily on them.

As the storm intensified over the Dakotas and then headed into central WI from the 27th to 28th, a strong northeast wind ensued across the big lake. During the peak of the storm, the winds became sustained from 50 to 60 mph for 13 hours straight. Wind gusts routinely reached around 70 mph. These winds battered the north shore of MN with towering waves over 20 feet high. Many of the ships that sank were bashed against this rocky coastline.

In the next article, the recap of this historic continues with a look at a few of the vessels whose fate was sealed during this epic storm. 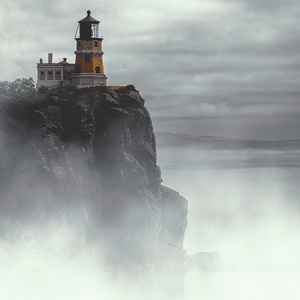 A view of the cliffsides that are found along the north shore of MN below the Split Rock Lighthouse.
Next
Wildlife Wednesdays: Fourth of July Pet Safety