Professor Paul Thursday-When Was Radar First Used For Wx? | weatherology°
This website uses cookies to improve your user experience and for analytical purposes. By clicking the "Accept & Close" button, you agree to the storing of cookies on your device while using this site. Please see our privacy policy to learn more about how and why we use cookies.

Radar is an acronym that stands for "radio detection and ranging." The invention of radar was a collective effort that involved the ideas of many leading scientists from the late 1800's through the early 1900's. In 1886, a German scientist named Heinrich Hertz was among the first to find that electromagnetic waves could be reflected off of different objects and sent out in concentrated beams. Then other scientists such as Guglio Marconi, Christian Hülsmeyer, and even Nikola Tesla had their hands in furthering the science behind radar. The development of radar as we know it today was slow to evolve in the early 1900's, mostly because the technology wasn't deemed terribly useful at that time. This all changed during the 1930's, as hostilities in Europe began to increase.

Leading up to WWII, the British, among other military powers, were feverishly working on developing and improving radar technology to help defend themselves in anticipation of the war. The main emphasis of radar technology at this time was that it could be used to identify hostile aircraft and ship traffic, thereby giving details on enemy positions and possible bombing raids. By 1937, the British began construction on a series of land-based radar sites that began to be used in 1938. Then in 1940, the first known detection of precipitation by radar occurred in England. The precipitation echoes were perceived as a nuisance because they interfered with intended military applications.

Once WWII ended, the value of radar in the field of meteorology began to be taken seriously. The installation of the first weather radar occurred on Feb. 14th, 1947, in Washington DC. That same year, additional sites were up and running in Wichita, KS and Norfolk, NE. Eventually, most of the country would benefit from radar coverage. This gave a huge lift to the field as precipitation bands could now be tracked across the country for the first time. Near the coast, precipitation bands associated with hurricanes could also be tracked before they headed inland.

For a look at where the Radar sites are located in the US, click here. 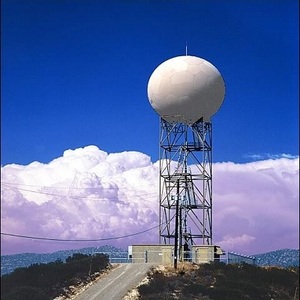 A weather radar known as the WSR-88D. There are 160 of these doppler radars across the US
Next
Professor Paul - The Science Behind Fall Foliage