Professor Paul Thursday - What Are The Roaring 40s? | weatherology°
This website uses cookies to improve your user experience and for analytical purposes. By clicking the "Accept & Close" button, you agree to the storing of cookies on your device while using this site. Please see our privacy policy to learn more about how and why we use cookies.

Professor Paul Thursday - What Are The Roaring 40s?

For centuries, mariners have referred to a region in the southern oceans as "the roaring 40s." This moniker refers to the region of the southern oceans that starts at a latitude of 40 degrees south and extends southward from there. At these latitudes, strong westerly winds are nearly constant. During the days when ships depended solely on wind power, most sea routes planned on making their way into this region when possible, in order to make faster progress during at least a portion of their journey. Let's look into why this part of the world is so susceptible to high winds and the rough seas that accompany them.

Global wind circulations are driven by the uneven heating of the Earth. Near the equator, the sun is strong and the days are long year-round. This is because of the sun’s high angle in the sky and the long arc that it follows throughout a normal day. Meanwhile, the vast continent of Antarctica remains frozen throughout the year. The snow and ice that covers Antarctica, even in the summer, reflects much of the sun’s energy back up into space. As heat builds over the equator, warm and buoyant air rises into the upper atmosphere, then diverts both to the north and to the south of the equator. As the air from the equator heads to around 30 degrees south and north latitudes, it begins to descend over this region. This descending, warm air keeps a majority of this region of the world from seeing much in the way of precipitation, as a semi-permanent high pressure system sets up in this area. If you look at a globe, you can see the largest deserts in the world are located around the 30th parallel.

Meanwhile, strong low pressure systems circle the Antarctic continent during all points of the year. This juxtaposition of high pressure to the north, and persistently lower pressure found further south, fuels a strong pressure gradient that drives the persistent winds over latitudes along and south of the 40th parallel. The lack of major land masses below the 40th parallel also gives the winds extra power due to their uninhibited journey across open waters, free of the friction that occurs over land. 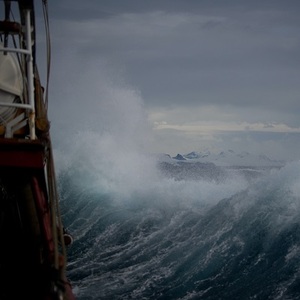 Some of the roughest seas occur in the open ocean surrounding Antarctica.
Next
Professor Paul Thursday - The Mysterious Horizontal Rainbow