Professor Paul Thursday - What Is A Seiche? | weatherology°
This website uses cookies to improve your user experience and for analytical purposes. By clicking the "Accept & Close" button, you agree to the storing of cookies on your device while using this site. Please see our privacy policy to learn more about how and why we use cookies.

Professor Paul Thursday - What Is A Seiche?

The term seiche is likely one which many folks may be unfamiliar with. Even coming up with the correct pronunciation of the word can be a difficult test, as it was for me. Webster's dictionary defines seiche (pronounced as saysh) as follows: "an oscillation of the surface of a landlocked body of water (as a lake) that varies in period from a few minutes to several hours." This is a start, but to gain a full understanding of what a seiche is, lets dig into how, where, and when seiches develop.

To gain an understanding of what a seiche is, it is helpful to look at how water behaves in a bathtub. First, let's assume the bathtub is half full of water. Now, imagine pushing as much water as possible to one end of the bathtub. Once a substantial amount of water has been pushed to one end of the bathtub, think of what would happen if you were able to abruptly let the water rush back down. This would create a sloshing effect of the water in the bathtub, as the water would first collect (and raise the water level) on the opposite side of the bathtub, while simultaneously lowering the water level on the side that initially held the excess of water. As long as no other forces were applied to the water, the water would sway from one end to the other several times (thereby continuing to raise and lower the water level on the opposing sides), until it would eventually come to rest. This is essentially what a seiche is on a very small scale. A seiche is basically a standing wave, due to the pendulum-like movements of the water levels that occur during a seiche.

Seiches are not an uncommon phenomenon for large bodies of water or ocean bays during certain weather patterns. The most common set up for a seiche occurs on the Great Lakes when there is a strong persistent wind blowing across the lake, followed by a sudden weakening of the winds. This can occur when a strong, slow-moving low pressure system affects the area, or when a complex of fast-moving thunderstorms produce intense straight-line winds across the lake. Strong seiche events can bring water levels up as much as 7 feet in a matter of minutes. 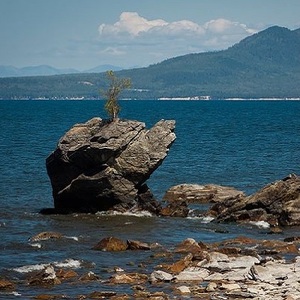 Large lakes like those in the Great Lakes can experience seiche events.
Next
Professor Paul Thursday - What Is The Cryosphere?