Professor Paul Thursday - The First Thanksgiving | weatherology°
This website uses cookies to improve your user experience and for analytical purposes. By clicking the "Accept & Close" button, you agree to the storing of cookies on your device while using this site. Please see our privacy policy to learn more about how and why we use cookies.

The colonists who sailed to America in the 17th century faced many dangers on the voyage across the Atlantic. Their reasons for leaving Europe varied from the desire for religious freedom, to seeking the opportunity and prosperity that they hoped the "New World" would offer them. The success of their journey across the Atlantic and their eventual colonization would be highly dependent on how they were able to persevere through the severity of the weather conditions they would encounter.

The Mayflower set sail for America in early September of 1620, and after 66 days at sea reached Cape Cod on Nov 9th. During this time of year, the North Atlantic Ocean is oftentimes beset by extremely rough seas. Remnant hurricanes commonly track into this region and intense extra-tropical low pressure systems also become more prevalent. To undertake a journey at this point in the season, in a wooden ship powered by sail and only 88 feet in length, would seem foolhardy and doomed to fail. Much of what we know about the journey is thanks to a journal that was written by William Bradford, titled "Of Plymouth Plantation, 1620-1647." In his account of the journey, we learn that during the month of October, the Mayflower began to run into major Atlantic storms and many thought it would surely not make it through. The wind was so fierce that the sails had to be lowered several times, meaning the ship was basically floundering in the turbulent seas. There are accounts that the ship did take on substantial damage during these episodes, but through grit and determination, the crew was able to repair her and keep the Mayflower seaworthy. Their intention was to land in northern Virginia, but the weather conditions dictated their eventual landing place. A major storm blowing in from the south kept the ship from landing near the Hudson River, and they instead sailed back north to Cape Cod, to escape the perils brought on by another storm.

The perseverance and courage it took for the crew of the Mayflower to reach America safely is quite inspiring when we look at how the odds were stacked against them in many ways. Tragically, nearly half of the passengers weren't able to survive their first New England winter. Thanks to help from Squanto (an English speaker from the Patuxet tribe) and the local Wampanoag Indians, the colonists were taught how to grow crops and hunt local game to enable their survival in the harsh climate. Without that help, it is unlikely that any of the colonists would have survived past the first winter. That following fall, the colonists celebrated their first successful harvest with the local Wampanoag tribe in a three day festival of thanksgiving. It is said that there were around 90 present from the Wampanoag tribe and 53 colonists from the Mayflower. The Wampanoag tribe brought 5 venison for the feast which was likely supplemented by fish, shellfish, and various vegetables. Potatoes or pies were not available at that time, but wild turkeys were common in the region and may have been another source of protein at the feast.

George Washington was the first president to make a declaration for the celebration of Thanksgiving on the last Thursday in November of 1789, but it wasn't an official national holiday until Lincoln made it one in 1863. A link to Abe Lincoln's Thanksgiving Proclamation can be found here.

Happy Thanksgiving from all of us at Weatherology! 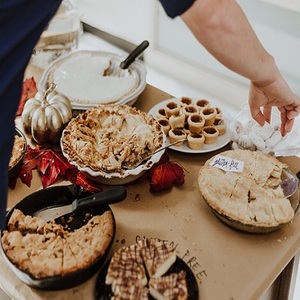 A spread of pies ready to enjoy! 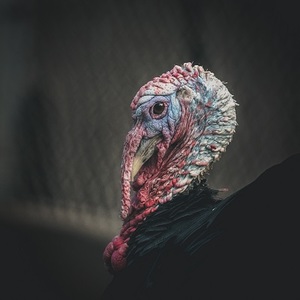 Wild turkeys were common to the area in the 1600s.
Next
A New Twist on Batteries