Professor Paul Thursday - The Beauty and Danger of Rime Ice | weatherology°
This website uses cookies to improve your user experience and for analytical purposes. By clicking the "Accept & Close" button, you agree to the storing of cookies on your device while using this site. Please see our privacy policy to learn more about how and why we use cookies.

Professor Paul Thursday - The Beauty and Danger of Rime Ice

Winter mornings can be full of surprises. Whether it’s a new coating of snow that fell overnight, or a sunrise over the frozen landscape, winter scenes can be filled with beauty. During certain weather patterns, something called "rime ice" can paint the landscape with a delicate coating of ice. This can create breathtaking views as it accumulates on trees. However, rime ice can also be a danger, as it can accumulate on roads and sidewalks. For the aviation industry, rime ice is a major concern when it accumulates on the surface of airplanes.

Rime ice can, at times, look very similar to another phenomenon called "hoar frost," but there are a few ways that can help distinguish the two from each other. The ideal setup for rime ice is when heavy fog develops during the night as the air temperature falls below freezing. This type of fog is called "freezing fog." Remember that fog is made up of tiny water droplets. In order for water droplets to freeze, they need to find a surface with which they can freeze onto. When there is nothing to freeze onto, the temperature of the droplets falls below freezing. When they come into contact with any objects, such as a tree, they will freeze onto that object.

Rime ice is different from hoar frost, in that rime ice is formed when supercooled water droplets freeze onto objects. Hoar frost occurs when water goes from a gas, known as water vapor, and then skips over the liquid stage and freezes onto an object. The appearance of rime ice is very similar to that of hoar frost, except that rime ice can tend to accumulate more heavily on objects.

When planes take flight, they oftentimes ascend through cloud layers that are full of supercooled water droplets. These droplets can form layers of ice on the airplane, thereby increasing the weight of the plane and decreasing the amount of lift that can be generated. The aviation industry employs anti and de-icing agents on the surface of planes to lessen the risks associated with rime ice build up on aircraft. 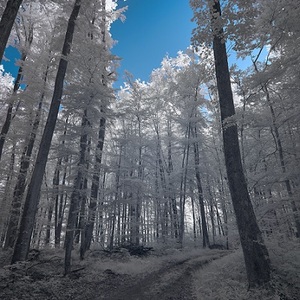 Rime ice can give forests an enchanted appearance.
Next
Wildlife Wednesdays: Arctic and the Arachnids