Professor Paul Thursday-Stages of T-Storm Develop. Part 2 | weatherology°
This website uses cookies to improve your user experience and for analytical purposes. By clicking the "Accept & Close" button, you agree to the storing of cookies on your device while using this site. Please see our privacy policy to learn more about how and why we use cookies.

During the first stage of thunderstorm development, we learned how pockets of air, called thermals, can become buoyant and ascend into the mid and upper levels of the atmosphere. This stage forms the early stages of the thunderstorm’s updraft. The updraft can be thought of as a river of air that starts at the ground and flows up into the atmosphere. It is why cumulonimbus clouds can grow to heights of 60,000 ft.

At the end of stage one,  the updraft has produced so many water droplets that they begin to collide with one another, and in doing so start to stick together. This acts to form larger drops that eventually become too heavy for the updraft to support. This is when we start to see rain falling to the ground. It is important to note that the updraft is never a laminar flow of upward moving air. Instead, there are moving currents of air that rise and fall to various levels within the cloud layer, which creates more collisions with the water droplets. In the mid and upper latitudes, ice crystals are found in the highest levels of the cloud. This adds a nuance to the process in which rain forms. Ice crystals collide with supercooled water droplets, thereby creating large snowflakes that melt into rain drops as they head to the lower levels of the cloud and down to the ground. The point at which the cloud has grown to a cumulonimbus cloud and it begins raining, is known as the mature stage of thunderstorm development.

When rain falls through the air, it drags air down with it. At this stage, the thunderstorm is not only composed of a mature updraft, but it also begins to form a downdraft, brought on by the falling raindrops. A downdraft is basically the opposite of an updraft. Instead of rising air, a downdraft is a river of descending air that sets up near the updraft and accelerates down to the ground.

During the final stage, known as the dissipating stage, the downdraft begins to overtake the updraft. Once the updraft dissipates, the storm has lost its main source of energy (the warm, moist air brought in by the updraft). The cumulonimbus cloud begins to lose its form and what is often left is a rain-cooled gust of wind, known as a gust front. All of the stages of thunderstorm development can occur during a time span of as little as 30 minutes! 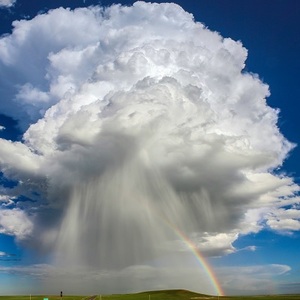 A look at what the mature stage of a thunderstorm can look like.
Next
Wildlife Wednesdays: Cold Safety Tips for your Pets