Professor Paul Thursday- A White Christmas In Florida? | weatherology°
This website uses cookies to improve your user experience and for analytical purposes. By clicking the "Accept & Close" button, you agree to the storing of cookies on your device while using this site. Please see our privacy policy to learn more about how and why we use cookies.

When traveling to Florida for the Christmas holiday, folks may not be surprised to experience some cooler nighttime temperatures, at times. However, if they were told that parts of the state may see a white Christmas, they would likely laugh it off as a joke. Unfortunately, this was no joke back in December of 1989. The year the Nintendo Game Boy was the hottest toy of the season, snow and record cold was building into Florida.

In late December of 1989, an arctic cold front headed unusually far south for the time of year, as it pushed across the entire southeast US, before stalling out in central Florida on the morning of the 22nd. At this point, a low pressure system began to spin up off the east coast of Florida. As the system tracked northeast off the southeast coast of the US, a band of heavy snow and mixed precipitation tracked across northern Florida and along the coasts of North and South Carolina. Initially, the precipitation began as rain for northern Florida, but as the arctic air spilled further south into the state on December 23rd, it changed over from freezing rain and sleet, over to snow.

By the evening of the 23rd, snow flurries were reported as far south as Tampa and Daytona Beach. Meanwhile, measurable snowfalls were being reported further north. Jacksonville Beach measured a record snowfall of 2.5 inches, while Tallahassee came in with an inch. This was enough to give portions of north Florida the first and only white Christmas that has ever been recorded there.

On Christmas morning, record lows were widespread across the state as much of north Florida saw lows from 10 to 15 F. Citrus producers north of Interstate 4 saw their entire crops destroyed during the record cold, while growers further south saw some substantial losses as well.

A map of snowfall totals from this storm can be found here. 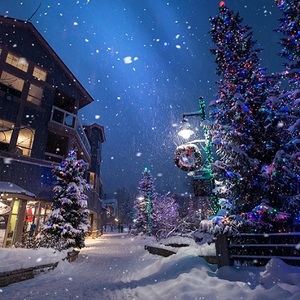 In 1989, portions of north Florida had enough snow on the ground to record their only known white Christmas.
Next
Professor Paul Thursday - Volcanic Activity On The Moon?