Professor Paul Thursday - Women's World Cup Weather | weatherology°
This website uses cookies to improve your user experience and for analytical purposes. By clicking the "Accept & Close" button, you agree to the storing of cookies on your device while using this site. Please see our privacy policy to learn more about how and why we use cookies.

As the Women's World Cup continues over the next few weeks, matches will be played in nine different cities across France. The end of the road leads to Lyon, where the championship match will be played on July 7th. The US will be defending its World Cup win back in 2015, when the women beat Japan 5-2. Back in 2015, the World Cup was held in Canada, and players dealt with some extreme heat due to the high turf temperatures. In fact, there were safety concerns for the players as the artificial turf temperatures were routinely rising to around 120F during the matches. This year, the nine stadiums in France all have natural grass, which will certainly be a welcome change for the players for many reasons. Let's look at what type of weather conditions can be expected at the World Cup venues during the tournament this year.

The soccer stadiums that will host games are mostly located in the southeast and northern portions of France. In southeastern France, the average high temperatures during the month of June range from the mid 70s to around 80. Average low temperatures for the region fall into the upper 50s to low 60s in most areas. Coastal towns along the Mediterranean Sea tend to stay a bit warmer at night due to the warmer water temps in the mid to upper 60s found along the coast. For northwest France, where Roazhon Park resides, in Rennes, average highs for June are in the low 70s, while low temperatures fall somewhere in the low to mid 50s. In northeast France, where there are four venues holding matches, June high temperatures fall in line with averages for northwest France. The northern cities in France border the cooler waters of the English Channel, which does keep averages lower closer to the coast. Current surface water temperatures across the English Channel are in the mid to upper 50s.

At the beginning of the World Cup last week, cool and blustery conditions were experienced during the first match that was held in Paris, as fans were forced to bundle up. Since then, the weather pattern has stayed fairly consistent. This is due to a significant upper level trough that has dug into the region from the UK and the North Sea the last several days. This feature has kept the region cooler than average with some extensive rain bands building over the area at times. Meanwhile, hot and dry conditions are being experienced over eastern Europe, as highs in the 90s blanket areas from Hungary and Poland over through Romania and Ukraine. France continues to see temperatures struggle to get into the 60s across northern areas, while southern cities, such as Nice, have been able to get into the 70s. The forecast still calls for cooler and more breezy weather with shower chances over the next few days, especially across northern areas of France. The forecast models are showing a gradual warming trend over the region as we continue into next week. This is due to the upper trough lifting a bit to the north. This will result in warming temperatures into the upper 60s to mid 70s by this weekend and into next week for northern France. At the same time, southeast France will trend to highs in the 80s and even a potential 90 degree day or two later in the month. Rain and storm chances will push across the region periodically as we look ahead to next week and the later half of June. Thankfully, more sunny, dry days are also expected in between the rain threats.

The overall weather pattern is expected to improve as we head through the later part of June, as the unseasonably cool and rainy conditions will start to ease up across the country. This could bring some talk of heat and humidity impacting the players later in the month for games in southeast France, while the northern venues will stay comfortable throughout the tournament. The good news is that even with some warmer temperatures, the natural grass fields will not heat up to the scorching levels that were reached during the last World Cup. Go team USA! 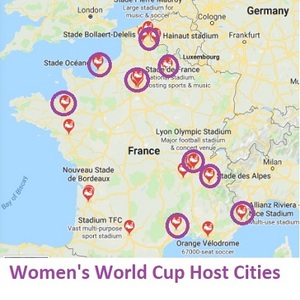 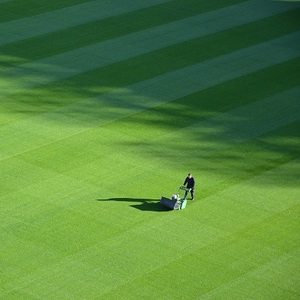 Natural grass fields in this year's World Cup will keep field temps cooler
Next
Professor Paul Thursday - What is the Heat Index?